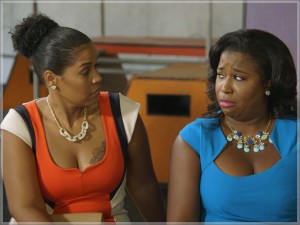 VH1 has a new show called Bye Felicia! What’s the purpose? Black women set out to help White women make better versions of themselves. Why? Well, because all of us Black women wake up every morning wondering, “How can I make a White woman better today.” Right?

The show centers on Atlanta-based life coaches Deborah Hawkes and Missy Young, childhood friends that specialize in Personal Development/Change Management and  emotional healing respectively. They attempt to dive underneath the “calorie counting and UGG boots” to manage the problems that White women in Los Angeles face. It just sounds too ignorant to be true: two Black women traipsing around L.A. and saving White women from themselves with a heavy dose of side eyes, shade, and “She tried it”s.

Via the press release:

White women of LA are getting a serious confidence boost and a little dose of reality with the series premiere of “Bye Felicia!,” premiering Tuesday, December 9 at 9PM, on VH1.

The 8-episode, hour-long series follows Atlanta-based life coaches Deborah Hawkes and Missy Young (who are both black) as they set out to help white girls across the Los Angeles area. Each closed-ended episode aims to empower two different women who could use a dose of honesty in order to turn their lives around. Hoping to impart their unique experience and wisdom through motherly tough love, Deb and Missy teach these women to say hello to their better selves and goodbye to Felicia.

The word here that sticks out to me most is “motherly.” This show is set to exploit one of the worst and most dangerous tropes about Black women: the Mammy. Assuming that White women just need tough Black women friends to help them through moments of catharsis or tribulation perpetuates the notion that Black women exist only to serve the White family. It stems from centuries of commodification of Black women’s bodies as nurse maids, caretakers, and domestic laborers for White Women. This system of gender violence has always prioritized the humanity and womanhood of White women over Black women. And, this show is in the same vein.

For lack of anything more apt, we say “Bye Felicia!” Do not watch. Do not DVR it. Do not pass “Go!”