I Have No Words for Tamir Rice. 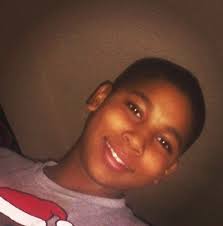 “Can I have that toy shooter Mommy?”

While many little boys run through streets, backyards, and playgrounds with toy guns, my sons don’t. Seeing White boys and their life-like toys has always been intriguing for my oldest. Instead of toys though, I gave him words. I did it because that’s what my parents gave me. Sadly, for Tamir Rice, the innocent 12-year-old Cleveland boy killed while playing with a BB gun by Ohio Police on Sunday, there are no more words – only a toy gun and a murder. This reverberating fact makes me feel more and more like my words to my own son mean absolutely nothing.

Like my son, many Black kids have received “the talk.” It’s the one where we are told exactly how we should respond to police to increase our chances of surviving the interaction. Older folks say things like, “Don’t move too quickly,” and, “Always do exactly what they say,” and, “Don’t talk back.” We tell them to keep their heads down instead of looking to the sky. We encourage them to keep their pants up rather than behave like immature children in a relentless search for “cool.” We cajole them into positions of subservience rather than push them to lead others. We give them words to protect them from the unequal violence they may be subjected to because the threat of their blackness may one day overshadow their humanity. Older folks know that one time could be the last time. To prepare them: words.

We give these young people words instead of toys because we often feel like we can’t give them anything else. As Black Americans, we are not allowed to be children since the law and many Whites will never see us that way. Being a child while Black is no guarantor of lenience. Nor is it automatically indicative of innocence. While White children – even when they are violent and harmful – are privileged with the benefit of the doubt, Black children are criminalized the moment they exit the womb. Upon their first breaths, Black children inhale the burden of racial injustice. Their skin becomes their only real mode of currency unless they are lucky enough to never interact with a cop “at the wrong time” or “under the wrong circumstances.” More words we use to describe the injustice, not solve it.

We start them off at birth with a fresh batch of words hoping those will statistically limit the likelihood they’ll be shot to death by law enforcement. Then, as they grow, behaving more like the adventurous, inquisitive, risk-taking children they are, we draft a new menu of words to control their adolescence. Until they’ve “made it” we feed them words. Even when we have nothing else to feed them, we have every brand, flavor, and version of words we hope will protect them from the inside out. Like daily vitamins, we feed these youngsters empty words – some they’ll need, many they won’t. For what though?

We seldom form these words into resistance movements fighting against the very forces which seek to slay them. We rarely use these words to collectively organize against the ongoing pacification of our ranks and suppression of our voices. We hardly ever present our words before the White capitalists, legislators, and executives who benefit from their demise. Frankly, it’s unusual to see our words so consistently manufactured, reproduced, and regurgitated unless they are the sort that tell young Black people that they somehow hold the power and control. But, if we know they don’t actually hold the power and control, why do we keep feeding them the same stale shit?

Tamir Rice’s murder is not about whether or not he responded to cops “appropriately.” It isn’t about whether cops knew if the “weapon” was real or not. And, it definitely isn’t about all the words we can pile up to explain how police were responding to yet another call in Ohio about a “scary armed Black person” as best they could.

This, as with so many murders of Black people at the hands of the State, is about the impotence of our (in)actions, our complicity in these injustices, and our rampant buy-in of Black violence. While we are wasting our words on warnings to our own, Whites are using words to warn one another of our threatening presence. On national news media, they are framing us as ‘thugs’ while their own wear the term as a badge of honor. In online publications, they describe Black women as ‘angry‘ while their own volley for ‘turnt up’ street cred. They are using words against us while we do the exact same thing.

I honestly can’t say I have a solution to this. In times like these, I mostly feel despair and hopelessness. But, I come out of it. When I do, I feel the intense urge to do something – something more than just words. I have no words for Tamir Rice. He deserves more than my words. My son deserves more than my empty, self-resolute, ineffectual words.

We need more for them. Our words are not enough. We have to be willing to give more than our words because these words really don’t mean anything at all. And if nothing is our first, most frequent, or only contribution to their freedom, we are failing Black youngsters more than we know.