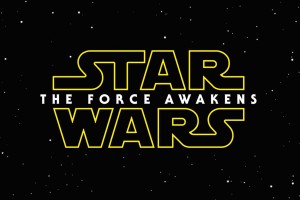 The first trailer for Star Wars Episode VII: The Force Awakens premiered today, and from the looks of things, it will calm any fears die-hard Star Wars fans might have with the return of the franchise.

The trailer doesn’t give away any of the plot, but clearly that victory at the end of Star Wars Episode VI: Return of the Jedi was not the end of the war. We see X-Wings, Stormtroopers, and even a Sith warrior with a triple(!)-headed lightsaber. Still, nothing can beat seeing the Millennium Falcon in action set to the iconic Star Wars score.

The film bridges the old and the new, bringing back its big names Harrison Ford, Carrie Fisher, Mark Hamill to reprise their roles as Han Solo, Princess Leia, and Luke Skywalker respectively. J.J. Abrams is handling the directing duties this time around now that George Lucas has stepped away. And “it girl” Lupita Nyong’o has also signed on for the geek-bait. It’s too much goodness to fail.

Look for the film to dominate theaters December 18, 2015.

Check out screen shots from the trailer and the 88-second clip below!

sith
The Sith take lightsabers to the next level