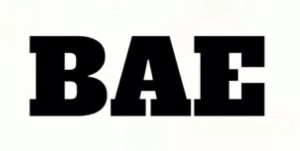 Slang follows a life cycle. A new term is put into the global lexicon, most commonly by Black entertainers and influencers. It catches on with the their fanbases – which are usually mostly Black. It then permeates all forms of media from Twitter to television. And inevitably, brands and their advertisers pick up on the trend and do their darnedest to leverage it for profit and “cool points”. At that point, any relevance the term might have once had is immediately vaporized. But, sadly, that doesn’t stop them.

The newest term to follow that life cycle? BAE. According to the Urban Dictionary “Bæ/bae is a Danish word for poop. Also used by people on the internet who think it means baby, sweetie etc.” Well, I never said slang words made sense or applied to other languages.

The term has actually been in use for God knows how long, but it picked up speed with the advent of #PrisonBAE. All of a sudden, anybody had the licence to use BAE as a noun, adjective, or verb. So, it wouldn’t be long before the corporate types jumped on the bandwagon too.

Corporations also love the term “on fleek” but I had to look it up to know that it meant “on point.” While most folks using the term use it to compliment someone’s eyebrows or style, big business has managed to apply it to just about anything.

Check most major corporate Twitter handles, and you’ll find their tweets laced with “BAE”s, “on fleek”s, and “basic”s. This is not a joke.  It has proliferated their social media accounts so thoroughly that an entire Twitter account (@BrandsSayingBAE) has been recently tracking the most egregious attempts at a corporate “blaccent.” Check out some highlights from their timeline: 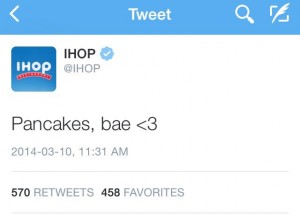 Mountain Dew claims to be the one true BAE.

Olive Garden tries (and fails) to be clever. 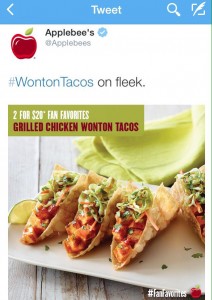 Still, IHOP takes the appropriation crown for this one. 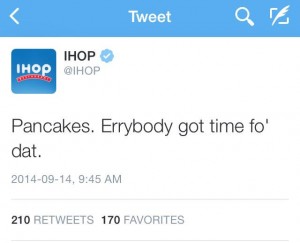 This phrase gained media attention when Sweet Brown shared her experience with a fire in her complex.

Funny? Yes. Unique? Certainly. But, should corporations steal her words to make money? Probably not.

This probably won’t entice any Black people to patronize these establishments. But for Whites? I get the feeling this might convince them to make IHOP pancakes their new BAE.

On the surface, this is just another sad attempt to make a few bucks. Underneath, it is another sinister occurrence of cultural appropriation. Just take what you wish of someone else’s culture and mold it to your benefit. Nevermind if it belittles or degrades the people who originally coined it. There is money to be made.

Now that the words are being appropriated, they are morphing from the esoteric knowledge of Black Twitter into mainstream fodder. Last time this happened was a decade ago with “bling bling.” Remember?

At this point, corporations should be embarassed that they can’t sell pancakes or tacos without hijacking Black pseudo-culture. But, as long as Whites keep retweeting, chuckling, and validating these desperate attempts at cool, it will never end.

What do you think? Should corporations use words like “Bae” and “on fleek” on social media? Sound off in the comments below.