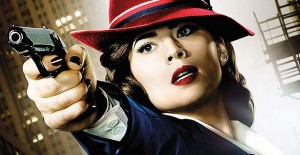 I’ll admit that I watched Marvel’s Agent Carter on Tuesday fully expecting to hate it. I quit on Marvel’s Agents  of S.H.I.E.L.D. …  twice.  I figured I’d quit on Carter within the first 30 minutes (it is set in 1946 after all). But within 60 seconds, I was captivated and bought into the whole 2 hour affair.

First, as all Marvel properties now do, the series begins by linking to a previous Marvel production. In this case, we see Agent Peggy Carter in the wake of losing Captain America at the end of the Captain America: The First Avenger film. She is heartbroken over his loss, and she has to face each day with his (apparent) death hanging over her head. That’s one hell of a hook, and it doesn’t help matters that the entire world is tuning into Captain America radio shows every night.

The only female agent at the Strategic Scientific Reserve (S.S.R.), her wartime glory days are over, and she has been reduced to secretary-like status due to her gender. The amount of times she is dismissed or completely ignored because she is a woman is dizzying. However, she doesn’t take it lying down, choosing the perfect moments to undermine her counterparts and show her superiority. Once a man “stands up for her honor,” she scolds him and asserts that she can handle herself. When all of the agents try to catch a bad guy in a foot race, she takes the stairs and stops him without breaking a sweat. 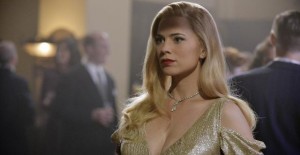 It’s that fine line that she has to walk that makes the show so intriguing. She seeks clandestine information in one moment, and the next she’s being told to manage the phones. She knows women aren’t taken seriously, so she uses being seen as useless to her advantage while being cautious to not get caught overstepping her bounds.

Like most sci-fi leaning shows, there is also an overarching mystery that hangs over it all. Agent Carter is tasked by former ally Howard Stark to clear his name as the S.S.R. tries to find and prosecute him for arms deals. While he is on the run, he enlists his butler Jarvis to assist Carter, though he takes a strict 9PM bedtime. And in the wings, a mystery man who communicates with his leadership through an astonishingly high-tech typewriter knows who Agent Carter is, and if she gets in the way of his mission, he is tasked with taking her out.

Still, the human element grounds the show outside of all the spy action. Within the first hour, her roommate is killed because Carter was a bit sloppy in a getaway. And as she grows closer to a waitress, the thought of moving into her same building petrifies her. She needs a place to stay, but she fears that anyone near her will be marked for death. Will she be able to overcome this fear and protect those she cares about?

Hayley Atwell does a masterful job leading a series so full of potential and wonder. ABC has a history of performing well with shows led by strong female characters (Alias anyone?), and that same tone is struck here. It’s fun. It’s outrageous. But it is also very real. Marvel’s Agent Carter is not to be missed.

Check out the promo for next week’s episode below.

Did you fall for Marvel’s Agent Carter? Tell us what you thought of the show in the comments section below, and follow our #BlerdTV guide!