Lifetime’s “With This Ring” Deserves to be in Theaters 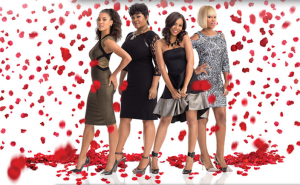 I don’t like romantic comedies. But I enjoyed this one…thoroughly.

With This Ring is an adapted film based on the bestselling book “The Vow: A Novel” by Denene Millner, Mitzi Miller, and Angela Burt-Murray. It follows three women who – while attending their friend’s wedding – make a vow to get married within a year. From there, hilarity, heartache, and the search for happiness ensue.

As Trista (Regina Hall), a hard working agent in Hollywood, navigates her career, she is faced with her shrinking options in romantic partners and pressures to get married before it’s too late. Vivian, played by Jill Scott, juggles her role as mother and her desire for something more with the father of her son. Meanwhile, young actress Amaya (Eve Cooper) tries to find love in all the wrong places. All three women are forced to question their motives for getting married, their methods of finding love, and their prospects of success in either. Despite not having read the book, I felt like I knew these women. I believed their friendship.

Now, like I already noted, I don’t like romcoms. Actually, I kind of hate them. But, this isn’t your average romantic comedy. The three actresses held their own and were never boring, predictable, or cheesy. Gabrielle Union even gives a good “read” in the movie. There were none of those corny moments where the guy says the exact right thing and gets the exact reaction he was looking for. In fact, there were times when I was surprised. That just doesn’t happen to me very often.

As we were watching, we kept commenting on how well written the script is. It’s the quintessential bourgie Black folks narrative nestled in a bed of edginess and LA pop culture. If I had to sum it up, I’d say it was “About Last Night” meets “Waiting to Exhale” with a splash of “Why Did I Get Married Too.” Having lived in the city for some time, the movie definitely captured the fast-paced lifestyle of Los Angeles and the unnecessary opulence of its night scenes. The funny moments were very funny but natural. However, the sad moments were emotional but they could have gone a bit further. When it comes to television movies, though, the sentimentality, timing, and pace were far beyond the status quo.

What seemed odd to me was the fact that this movie is airing on Lifetime. No shade but it definitely deserves to be at the box office. I kept thinking “This movie is way better than ‘Baggage Claim’ and ‘Jumping the Broom.'” Maybe I shouldn’t be comparing it to Paula Patton movies (again, no shade) but both of those films were predictable and a tad bit stale. I would have paid the evening ticket price to see With This Ring. Yes, that means I would have seen it even without the matinee price. In fact, I think I will be watching it again this weekend.

Perhaps it’s the Regina Hall effect. Or maybe it’s because I have a slight crush on Jill Scott cause she is fine as hell and her body is banging. In either case, this movie is cute, witty, engaging, and flat out entertaining. And, it deserves to be in theaters yesterday.

Watch the With This Ring on Lifetime this Saturday, January 24th at 8/7 central.