Key and Peele Do Marshawn Lynch and Richard Sherman Well 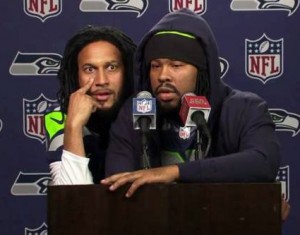 I have literally nothing of substance to discuss regarding Sunday’s Super Bowl. While I am tickled pink that a fellow Bulldog will be playing in the big game – Marshawn Lynch (shout out to my Alma Mater Oakland Technical High School) – I must say that I still hate football. I still maintain that it more closely resembles chattel bondage than sport. And, I believe it is a bane on American existence. Despite those feelings, I must say, I hollered while watching Key and Peele’s Super Bowl Special. I mean, it’s just funny.

Playing up the fact that Stanford educated, acclaimed Seattle Seahawks cornerback, Richard Sherman – well-known for speaking his mind in the presence of White people – tends to give extremely eloquent and well-reasoned interviews, Key and Peele juxtaposed Sherman’s verbosity with running back Marshawn Lynch’s penchant for saying as few words as possible whenever interviewed by reporters. The result is absolute hilarity.

Honestly, I won’t be watching the game. But, I am here for Richard Sherman and Marshawn Lynch setting boundaries for themselves as Black bodies in America. I have an appreciation for their need for privacy. In a world where many in the mainstream believe they have an ordained right to invade the personal space of people of color, Lynch and Sherman are making it clear that they can be successful without the approval of the White Gaze. Frankly, while that makes for a great Key and Peele skit, it also proves that mass media has a long way to go in stepping back and allowing folks in the public the humanity they deserve.

In case you haven’t seen the interviews from Sherman and Lynch, here are a few of the funnier ones.

Here’s the one that made a bunch of White people afraid of Richard Sherman.

Here is Sherman’s follow up where he explains the subtle racism he experienced in the media.

Here’s the one where Sherman mocks NFL media policies.

Here’s the one where Marshawn shouts out “the real Africans.”

Here’s the one where Marshawn says over and over again “I’m here so I won’t get fined.”

Here’s the one where Marshawn plays video games.

Here’s the one where Marshawn answers “yeah” to every question.