Recognizing the Legacy of Women During Black History Month 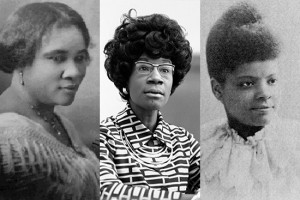 Growing up, two prominent figures were frequently highlighted during Black History Month: Rev. Dr. Martin Luther King, Jr, and Frederick Douglass. I always remember wondering: where are the Black women in all this?

Sure, there were mentions of Harriet Tubman’s harrowing expeditions freeing slaves via the Underground Railroad. But, beyond that, I rarely heard the names of women who played a role in Black History. Both King and Douglass were commonly framed as exemplary orators, voices ahead of their times, men whose efforts were fundamental in the shaping of Black life, past, present and future. They had character and depth that social narratives didn’t really afford Tubman. In many cases, she was granted a gratuitous “honorable mention” rather than the spotlights both King and Douglass enjoyed.

It wasn’t until high school that I first heard names like Zora Neale Hurston, Sarah Breedlove (better known as Madame CJ Walker), Ida B. Wells, Shirley Chisholm, and Ella Baker outside of my home. Writers, activists, entrepreneurs, and political icons, these women’s history seemed distant and dislocated from the mainstream conception of Black History so many celebrated each February. Their invisibility during a time of year when the central focus is Black heritage has always been so normalized. It wasn’t until I sought independent research that I realized who these women were and what vital roles they played throughout history.

The intergenerational erasure of Black women from historical narratives has impacted the way we conceptualize Black History on the whole. Seeing historical events as led by men alone appropriates Black women’s contributions while reinforcing this inaccurate and damaging message for future generations of Black scholars, educators, and political leaders.

Luckily, recent events seem to be indicating a shift away from this unfortunate trend. An increased focus on Black women in American history appears to be the sea change our historical framework needs. Not only are media outlets and consumers seeing the importance of Black women in our collective past, there has been increasing efforts to uplift Black women making history in the present.

For the first time, a Black woman – Ava DuVernay – was nominated in the “Best Director” category at the Golden Globe Awards. While there is some controversy surrounding DuVernay’s many snubs for the Martin Luther King’ Jr. biopic Selma, there has been resounding praise for her ability to center Black women like Coretta Scott King and civil rights leader Diane Nash despite the movie’s overwhelmingly male cast. The commitment to developing these women’s complex roles in the 1960s Civil Rights Movement signals an effort to add depth and humanity to women who are often left out of these stories altogether. Her attention and care in foregrounding Black women is evidence of a change for which we are in dire need.

Following this trend, Elle debuted a photographic journey through Black History called“#WeAreBlackHistory” this week featuring well-known Black women entrepreneurs, scholars, activists, and writers styled like historic Black women figures. Blogher’s ownFeminista Jones was featured as Betty Shabazz – educator, civil rights activist, and the wife of iconic leader Malcolm X. From the late Maya Angelou to Angela Davis, this visual experience uses a contemporary lens to depict Black women of today as the historic figures of tomorrow. It is this concept of Black women as the central points of living history which makes this change in focus so important.

There is also something to be said for the history Black women are making right now. LaVerne Cox is the first openly transgender woman to be nominated for an acting Emmy award for “Outstanding Guest Actress in a Series”. Last June, she graced the cover of Time magazine (another first). And, it was announced this week that Cox is also set to play a transgender lawyer in a recurring role in the news CBS series “Doubt.” You guessed it. That’s a first too. The actress is one of many Black women in entertainment – like Lupita Nyong’o and Shonda Rhimes – who have become the faces of a new Black Women’s History. This is a history where Black women take the lead role, stand both in front of and behind the camera, and create shadows rather than stand in them.

Put simply, Black women are living history. In this age, when every trend seems to disappear as soon as it arrives, I am confident this one will stick around. It has been years in the making and is sustained by the growing demand for powerful, complex, and dynamic Black women in the foreground.

So, while I may not have seen Black women history makers featured prominently and accessibly in the mainstream growing up, I know my children will. And, I can be confident that the narratives they experience will be just as diverse as they are.

This article was originally posted on Blogher.