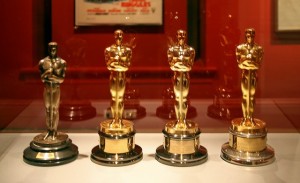 We rarely tune into awards shows in our household. When we do, it’s typically out of feelings of obligation to our readers, co-workers, friends, and whomever else. The entire time we watch, we moan and groan about how there is little to nothing in the shows which pertain to us: Black, millennial, bourgie, and politically aware. What’s great about this year though is that many Black folks seem to be completely uninterested in patronizing the Academy Awards at all. Here are just a few reasons why.

First, Sunday’s Academy Awards are set to be the whitest Oscars in twenty years. In the most coveted categories, like Best Supporting Actor/Actress, Best Lead Actress/Actor, and Best Director, there is not a single person of color nominated. To be clear, that is a single person of any color. Given the stellar performances and writing in films like Dear White People and Belle, it seems odd that DWP director Justin Simien and actress Gugu Mbatha-Raw have not one single nomination at this year’s Academy Awards. Quvenzhané Wallis, star of Will Smith’s, Jada Pinkett Smith’s, and Jay-Z’s reimagined Annie, got the Golden Globe nod but nothing at the Oscars. Overall, there is little recognition for the work of men and women of color last year. So, why should we watch White people congratulating one another…again?

Second, Ava DuVernay’s directorial triumph Selma was snubbed only being nominated in two categories (“Best Picture” and “Best Original Song”). Though DuVernay never really expected the recognition she deserves, she was most disappointed that lead actor David Oyelowo was passed over for this year’s Best Actor category.

Third, the Academy has a history of only awarding certain types of Black stories. We told you about last year’s Oscars ceremony where Twelve Years a Slave won for Best Picture (Steve McQueen), Best Writing Adapted Screenplay (John Ridley), and Best Supporting Actress (Lupita Nyong’o). And, while there is no doubt the film deserved the accolades, the film featured the typical “White Savior” story line and prominently featured White actors and actresses to filter the message of Black Struggle to the White mainstream. Nyong’o and lead actor Chiwetel Ejiofor were positively stunning in the film, but it’s overwhelming privileging of Whites was likely what made it more palatable to the Academy.

Fourth, recent interviews with actual Oscar voters have only worsened the situation. Last week, an Academy Awards voter, in an anonymous interview with the Hollywood Reporter, accused the cast of the film Selma of “stirring up shit” by publicly demonstrating support for Ferguson protesters.

What no one wants to say out loud is that Selma is a well-crafted movie, but there’s no art to it. If the movie had been directed by a 60-year-old white male, I don’t think that people would have been carrying on about it to the level that they were. And as far as the accusations about the Academy being racist? Yes, most members are white males, but they are not the cast of Deliverance — they had to get into the Academy to begin with, so they’re not cretinous, snaggletoothed hillbillies. When a movie about black people is good, members vote for it. But if the movie isn’t that good, am I supposed to vote for it just because it has black people in it?

I’ve got to tell you, having the cast show up in T-shirts saying “I can’t breathe” — I thought that stuff was offensive. Did they want to be known for making the best movie of the year or for stirring up shit?

She spent more time discussing what happened off screen than the contents of the film itself.

In a recent interview with the Hollywood Reporter, a second Academy Awards voter basically said that the awards show can’t be racist because they have a Black president (seems to be working for the United States right?)

I didn’t think Selma was a particularly good film, apart from the main actor [David Oyelowo], and I think the outcry about the Academy being racists for not nominating it for more awards is offensive — we have a two-term president who is a black woman [Cheryl Boone Isaacs] and we give out awards to black people when they deserve them, just like any other group.

So, the Oscars have a Black friend so they can’t be racist. I thought the quota was raised to two though…

Lastly, there is a beautiful thing called solidarity. We practice it in our home. With the recent trending hashtags, #OscarsSoWhite (created by @ReignOfApril) and #BoycottOscars, it is very clear that Black folks don’t see themselves reflected in this ceremony and that includes us. I know Shonda Rhimes once said that hashtags aren’t “helping”, but it seems they actually are. For marginalized communities, they anchor us one to another even across artificial boundaries. They demand dialogue on issues many in the mainstream would rather ignore altogether. And, in cases like the Academy Awards, they have the potential to make viewers question their own motivations for tuning in. I would certainly say that is helping. How much? We won’t know until tomorrow.