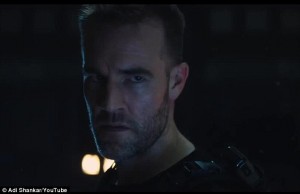 The gang is all there: Kimberly, Tommy, even Rita Repulsa. But these Power Rangers aren’t hanging out at Ernie’s Juice Bar. The intergalactic war is real, and the “child soldiers” recruited to become rangers pay heavy costs, especially into their adulthoods. And, every moment is as riveting as the show was for us as children.

This gory and gruesome (and NSFW) 14-minute film from producer Adi Shankar (A Walk Among the Tombstones) and music-video director Joseph Khan, tackles what it would look like if Zordon really did recruit 5 (6) teens with attitudes to defend the earth from invaders. The battle sequences reflect the grittiness of war, and it’s clear from the outset that there is no true happy ending here.

In fact, the movie takes place in a dystopian future. Humans have lost, and Power Rangers are public enemy number one. Needless to say, 5 people, no matter what morphing power they might have, aren’t much of a match for an entire invading army.

This film is not to be confused with or seen as an audition for the upcoming Power Rangers feature film. Though if I were Haim Saban, I’d be taking notes.

I won’t spoil it here, but the movie boasts impressive production quality and visual effects. Plus, there is the camp factor of casting James Van Der Beek (Dawson’s Creek) as the Blue Ranger and Katee Sackhoff (Battlestar Galactica) as the Pink Ranger. Shockingly, the story line works and all the cheesiness we loved so much in middle school is completely gone.

Don’t believe me? Watch the video below.

EDIT: The video has been removed from YouTube due to copyright concerns. However, it is still available on Facebook.

So, what do you think? Is this a good direction for the franchise? Should the Power Rangers go gruesome? Let us know in the comment section.