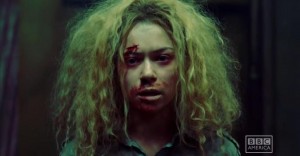 Orphan Black is returning to our TV screens on April 18th, and judging by the just released trailer, things aren’t getting any better for our clone clan.

The terrifying new trailer for season 3 of Orphan Black is full of grizzly images, most at the hand of the male clones (played by Ari Millen) making their entrance this season.

When we last left Sarah and her sisters (portrayed by Tatiana Maslany), the male clone bombshell was just dropped on us. At the same time, Helena was kidnapped. And so, just when they thought they might be making progress, their problems only worsened.

Now they face the even more terrifying threat of the male clones. Where their previous foes were more cunning and strategic in their assaults, it looks like these guys are just out for blood.

The brilliance of Orphan Black has been its ability to keep the audience guessing, and there are still so many unknowns for the crew to contend with (Just what is Mrs. S’s agenda? Why the two cloning programs? Who is behind it all?). This trailer shows that the deeper the clone club goes into the rabbit hole, the more peril they face. Be there April 18 at 9/8c for the fireworks.