Blerdy Ish: 01. We Stan Whoopi Goldberg From the Nineties 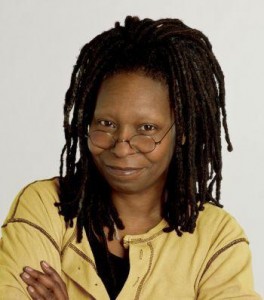 In 1985, a comedienne by the name of Whoopi Goldberg garnered critical acclaim for her portrayal of “Celie” in The Color Purple. But it wasn’t until she starred in Ghost in 1990 that she truly existed within Black lexicon. And for that one decade, the one where she wore long dreads, she mattered. Actually, she more than mattered. She was everything. And that is why blerds stan Whoopi Goldberg in the 90’s.

After thorough analysis (i.e. pouring over her IMDB profile and talking with other blerds), it has become crystal clear that all of Whoopi Goldberg’s star power was consolidated within the 1990’s. We have come to the conclusion that this can be attributed to her hair during this period. Her dreadlocks were long. They were very long (before that was even a thing). Before the 90’s, her hair was straightened, and after, she opted to revert back to shorter dreads. So, it’s clear, like Samson, her power is concentrated in her hair, and once she cut it, that power was gone.

But when she had that hair, she was everywhere that mattered. She guest starred on A Different World (“If I Should Die Before I Wake“) in 1991. Just to be clear, A Different World is blerd canon. She was in South Africa for Sarafina in 1992. And Sister Act? Sister Act 2? There are no words. Honestly, when we meet Black people who haven’t seen either Sister Act, can’t recite any of the rap lyrics from Frankie’s (or “Frank-ay Hay Ho Hay”) and Sketch’s epic battles, or speak verbatim the “Shoulda Woulda Coulda” line that broke all of our hearts, we question that character.

Hell, Whoopi Goldberg did voice work for The Lion King. The effin Lion King. If that wasn’t enough, she hit the hardcore nerd demographic by scoring a recurring role in Star Trek: The Next Generation, she starred opposite 90’s icons Whitney Houston and Brandy in the TV movie Cinderella (Brandy) (1997), and co-starred with Angela Bassett in the Teri McMillan’s How Stella Got Her Groove Back. Whoopi Goldberg was everywhere that mattered. And, all of us blerds noticed it. Not only that, we came to love her witty comebacks and her outlandish fashion style (which included Cross Colors and over-sized sweaters).

But there is one particular thing that Whoopi did that cannot EVER be overlooked. Above all else, Goldberg will always be a treasure to blerds everywhere for her voice work as Gaia on the seminal cartoon of “going green before that was a thing ” Captain Planet and the Planeteers which aired from 1990-92 and will always be ingrained in our childhoods.

I’m guessing you either didn’t know that or just didn’t remember it. But, yes, Whoopi Goldberg was Gaia. No. She isn’t perfect. Yes, Whoopi says some crazy stuff now. But, she was Gaia. Therefore, she is a blerd treasure and we stan her…from the nineties.

What do you think? Is Whoopi’s power in her hair? Did she cease to matter to blerds after the nineties? Is she stan-able? Sound off in the comments below.