Mýa Invites Us To Her ‘Love Elevation Suite’ 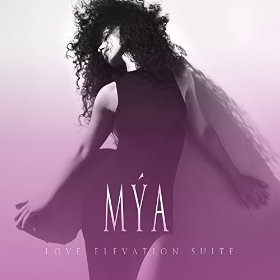 On her new EP release Love Elevation Suite, Mýa emulates the sound of current radio while showing that she’s still got the pipes and versatility that earned her star status.

The followup to her Sweet XVI EP, this relaxed five track set relies heavily on a Spanish guitar coupled with modern production methods to complement her silky voice. Mýa’s voice floats from track to track in soft sensual tones like Sade with a more current edge. The theme “Love Elevation Suite” is a play on words, alluding to a “sweet” natural high from love.

The album opener “Love Elevation Suite (Intro)” is smattered with Spanish lyrics and airy falsetto, setting a laid-back mood. It’s followed up by “Patience,” A song that lives in the anticipation before an intimate encounter. She implores for her lover to “take it slow” because they can “take their time.” The acoustic guitar and an electric bass provide the platform for a super-steamy track in the vein of Solange Knowles’ recent work.

On ‘The Truth,’ Mýa sings with a bit more conviction, even if the subject matter has been used ad nauseam. How many songs need to be written about someone being “the truth”? Still, she stays in that mellowed out zone that suits her voice well.

“On One” could have easily been a track on Jhené Aiko’s recent album Souled Out. It has new age production style as well as the bouncy delivery that has become popular amongst today’s urban artists. Mýa relates her lover to drugs or alcohol, singing that she is faded off of him. Once again, not the most original material, but she shows that she is a veteran of the game and knows how to expertly craft her vocals.

The album closer “Space (Extended)” featuring AGuyNamedCliff is a completely spaced out production. The most original song of the set is also the most successful. The tempo is slightly faster than all of the previous tracks, sounding upbeat in comparison, and her delivery has more heft. Mýa harmonizes with herself, creating a symphonic sound as she purrs about not needing space and preferring to be completely covered by her beau’s love. It is a perfect bookend to the EP’s intro.

Love Elevation Suite is another successful effort from Mýa that shows she is not to be slept on. With the backing of a major label (and its promotional dollars) Mýa could be a major force to be reckoned with.

Are you checkin’ for Mýa? Stream the songs below and download Love Elevation Suite now!