On Common, Colorblindness, and Extending a “Hand in Love” to White People 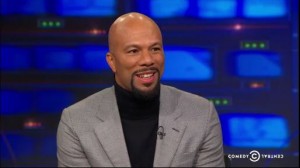 There is this misconception in colorblind, post-racial society that racism ended (formally) on January 1st, 1863 when President Abraham Lincoln issued the Emancipation Proclamation ending the institution of chattel slavery in the United States. Even stars, like rapper and actor Common, who seem well-acquainted with the vestiges of slavery use language suggesting that America’s racist history only affects the past. Sadly, this misinformed, misguided, and narrow conception of racial hierarchy in America is a fundamental reason why racialized systems of control manage to hang on.

Last week, Common appeared on the Daily Show with John Stewart to discuss his new film. Having just won an Oscar for his song “Glory” with John Legend (and the theme song from the Ava DuVernay film Selma), the conversation quickly turned to race and racism in America.

In the clip, Stewart notes that there has been an effort to shift the focus back to Whites in the “dominant culture” when it comes to issues of racism. He says, “There’s a real anger. A real vein of anger where they’re like, ‘Hey man! I didn’t have any slaves.’ But, you’re like, no, no, no. They’re not talking about that. They’re talking about a power structure.”

Then Common says, “We all know there’s been some bad history in our country. We know that racism exists. I’m saying ‘hey y’all, I’m extending a hand.’ And, I’m hoping a lot of the generations in different cultures are saying, ‘hey, we want to get past this. We’ve been bullied. We’ve been beat down. But we don’t want it anymore and we’re not extending a fist. We’re not saying, hey, you did this, you did us wrong.’ It’s more like, ‘hey, I’m extending my hand in love. Let’s forget about the past as much as we can. And, let’s move from where we are now. How can we help each other? Can you try to help us cause we’re going to help ourselves too.’ That’s really where we are right now.”

The audience, of course, erupts in cheers and applause. Agreeing with Common, Stewart notes that these types of issues might be better handled if Whites acknowledge the “injury” caused to Blacks.

In response, Common says, “I mean, we know that that existed. I don’t even have to keep bringing that up. It’s like being in a relationship and continuing to bring up the person’s issues.”

There are many fundamental problems with the language these two men deployed in this interview. First, all of the transgressions wrapped up in institutional racism are discussed in the past tense. Common emphasizes that racism is linked to “history” rather than a present state wherein Black boys are 21 more times more likely to be killed by police than White boys or where White fear is codified in the perpetual lack of indictments for civilian and non-civilian actors who harm Black Americans. Common’s language suggests that our “injury” is past racism not present racism. This is the folly of colorblindness.

How does colorblindness and post-racialism help to perpetuate racism? It suppresses the fact that it took another 100 years to “defeat” de facto (informal, in fact) and de jure (formal, legal processes) racism and discrimination like Jim Crow segregation, redlining and housing discrimination, “separate but equal” educational accommodations, and a host of other remnants of an institutional racial caste system designed to reproduce a racial order wherein Whites were firmly placed on top and Blacks as far down as physically possible. Not only that, it convinces many Whites that they no longer have to work against institutional racism. In essence, they begin to feel as though they can get off “scott-free.” This is the same mechanism which makes the SAE frat boys out to be a “few bad apples” rather than microcosmic examples of interpersonal animus that stems from a long history and present reproduction of racist, anti-Black ideals.

Second, Common suggesting that people of color extend a “hand of love” rather than a “fist” implies that our hands have ever done anything to mitigate White racism. Has there ever been a point in the history of this country where the “hands of love” of people of color were met with the dismantling of institutional racism? Even the Brown v. Board of Education decision didn’t make an attempt to disassemble the informal systems of segregation which remained after the legal end of slavery. Hell, Martin Luther King, Jr was killed for extending his loving hand to liberal Whites who (purportedly) supported his goals. Surely Common knows that.

Lastly, Common suggests that historic racism in America is like the baggage some folks bring into relationships; it’s something we should just stop “bringing up.” Condolezza Rice once said something similar. Suggesting that the only way to achieve harmony in civil society is for people of color to simply forget (or, better yet, erase) the centuries of sociopolitical, economic, and environmental predation on Black and brown individuals denotes a desire to never truly hold Whites accountable to the privilege they (still) receive from these processes. And, what kind of civil society does that create when only certain groups receive the full benefits of citizenship while others are silenced into submission?

In all, Common’s words are problematic for understanding how to best remedy institutional racism in the United States. His method is the Band-aid many Americans desperately want so they won’t have to endure the arduous process of actually dismantling White supremacy and privilege. But, it’s no solution. Common should truly never speak about racism in the United States again. At least not until he examines his own privilege and the downstream effects of his colorblind ideology.