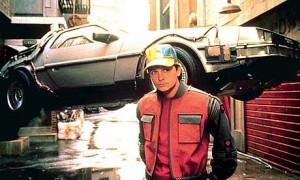 Back to the Future is thoroughly embedded in Blerd lexicon. The only Black faces I remember from the entire trilogy were the restaurant employee that eventually becomes the mayor and the family that lives in Marty McFly’s house in Part 2. But what truly makes the Back to the Future trilogy Blerd gold is the intricacies that create the backdrop of each film.

When broached for entertainment, time travel is often necessary to save the world or the reason the world needs saving in the first place. Action heroes take the plunge, facing dire consequences if they fail at their mission. But in Back to the Future, there is no time for anything on that scale. Marty has to get his parents back together (before he ceases to exist) and save his kids from becoming failures. Leave it to an 80’s film to take a subject with endless possibilities and center it on something germane to just one character.

But, that was why is worked so well. It took that open ended subject and made it relatable to everyone. It had (and still has) power. This goofy Michael J. Fox film had people wanting DeLoreans, quite possibly the most lambasted vehicle make in history. In fact, I still want a DeLorean to this day. Here are a few reasons why we stan Back to the Future.

Time travel is notoriously difficult to implement on film without leaving gaping plotholes or just leaving viewer plain confused. But Back to the Future did a shockingly solid job of not letting the complexity of time travel distract from the story.

The filmmakers used it to their advantage, throwing in jokes around changing slang and showing the progression of a city over decades as the appeal of certain neighborhood grew and faded.

Who doesn’t love Doc Brown (played by Christopher Lloyd)? There’s so much to love. There’s that hair. There’s those expressions. And above all else, there is his iconic declaration of “Great Scott!” His wacky scientist/inventor was the perfect counterpart to the “fish out of water” Marty McFly.

“Roads? Where we’re going, we don’t need roads.” Badassery at its finest.

Of all the films that have attempted to depict the future, Back to the Future Part II did it best. No dystopia. No nuclear fallout. No computer program running everything. No, this future was just like the present, but with much cooler tech.

Back then, the future was 2015, and the technical innovations they projected were pretty spot on: flat screen TVs, video chat software, multi-channel viewing, the ubiquity of cameras and, not to be left out, routine plastic surgery.

Still, the coolest tech was the Hoverboard, which brilliant engineering minds have actually made reality. META.

4. Use of universal themes in all time periods

Ultimately, the Back to the Future movies were so much fun because they showed the repetition of time.

The franchise is undeniably 80’s. Marty McFly spends the majority of each of the movies wide-eyed and in disbelief. It’s completely outrageous, and that is why we celebrate the Back to the Future trilogy. These movies were/are iconic. And they defined a generation.

And when nerds celebrate something, they create things like this.