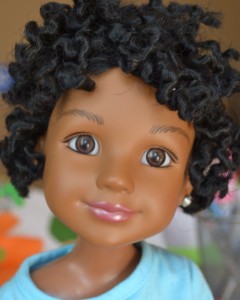 My daughter is a beautiful Black girl with a milk chocolate complexion, deep dimples, and bright almond-shaped eyes. And, she’s not into toys who don’t share those features. This, to me, means we’re doing a great job.

When I became pregnant with her, I decided not to buy her toys that don’t look like her. Instead, I tend toward dolls, books, movies, and coloring books which feature diverse characters who affirm, rather than undermine, her. While our family unilaterally supports these goals, there are always some in the community who worry she is “missing out” on something, like we are somehow limiting her. But, a recent event with an iconic Disney doll proved our efforts to teach our daughter to value her own ethno-racial heritage and consume products which cater to her background are actually paying off.

A few weeks ago, my daughter came home from a school field trip with an “Elsa” figurine (the protagonist from the hit Disney film “Frozen“). Another parent had purchased the toy for her without our permission. Apparently, they thought my daughter was being a really good girl so they chose to reward her with a platinum blonde, blue-eyed figurine with a waist too tiny to hold any human organs if she was blown up to scale.

Needless to say, she was elated. She was so pleased with her doll that she wanted to take it everywhere. She ate dinner with Elsa. She slept with her. She carried her around the house just because. Then, a few days later, the doll’s head fell off. It was the kind of fall off that couldn’t be fixed more than twice. So, rather than trying to salvage it, we gladly threw it away. In fact, we had her do it so we didn’t catch her wrath. But, to our surprise, there weren’t the usual tears or heartache typically deployed with relentless fervor by our three-year-old girl. Instead, she went off to play with her Dora the Explorer blocks. She seemed unphased by the early exit of Elsa from our home.

Contrary to popular belief, there are plenty of products out there which cater to diverse audiences. My daughter’s favorite books are “I Love My Hair” and “Big Hair, Don’t Care.” Her favorite dolls have kinky, curly hair. And, her outfits feature carefree Black girls eating ice cream and walking poodles. But, she also loves movies like “Frozen,” a franchise I find incredibly problematic in terms of it’s messaging about beauty and relationships. While I don’t forbid her from consuming such media, I make sure not to create an environment where those images are privileged. Yet, until now, I haven’t had any way to measure how this is affecting her. This instance was the first time I could truly see the fruits of my work.

In this case, I couldn’t help but feel that her reaction – to what would usually be a devastating tragedy for a three-year-old diva – could be attributed to our concerted efforts to empower her ideas of beauty. We have always surrounded her with images which centered her physical features and affirmed her. When styling her hair, we always talk about how much its growing, how beautiful it is, and how nice her hair looks once styled. We tell her how nice it is to have brown skin. We do the same for our boys. The entire family echoes positivity when it comes to our bodies.

Since she has become more interested in toys, books, and dolls, we have seen a change in her opinions. Before she started “reading,” she’d say she wanted “Elsa’s hair” but now, she says “I love my hair.” She used to see commercials featuring blonde Barbie’s clad in pink and she’s exclaim, “I want that!” Now, she is simply unimpressed.

Honestly, I struggled throughout adolescence with understanding my self-worth and beauty. I flat out hated my hair and was often teased about the texture, length, and kinkiness. There were times I laid awake at night begging God to give me lighter skin and longer hair. I told him I’d behave and get good grades if he just made me look different, pretty. I had internalized messages about my body that were reflected back at me. From the stringy blonde hair of my White dolls to the beige complexion of my “mixed heritage” Malibu Barbie, I didn’t see myself reflected back at me. My books didn’t talk about loving my hair. And, my Disney movies – like my daughter’s – featured characters who looked nothing like me. Unlike my daughter though, I wasn’t inoculated against this assault on my self-worth and identity. That’s why this means so much to me.

At only three-years-old, my daughter has realized that her beautiful is beautiful. She isn’t asking questions about why she has to look the way she does. She isn’t asking God to make her pretty like I did. She’s happy with herself. She loves the body she is in.

Even with the ubiquity of these asynchronous images, she has maintained a love for her physical features but I can’t say that our work is done. This doesn’t mean that we are now “off the clock” when it comes to supporting our family’s phenotypical features. What it does mean, though, is that we are preparing her for a world that will seek to dismantle her pride and self-worth. It means that she is better equipped to weather that storm.

For that, I am immensely grateful.