The Racists Are Winning: Why I Can’t Say ‘Micro-Aggressions’ Anymore 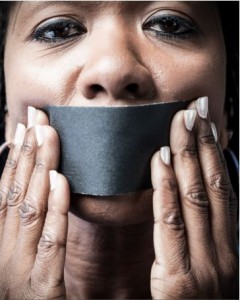 I realized today that I don’t know how to be a carefree Black girl. I think part of me wants to be. But, most of me can’t for reasons (read: White Supremacy).

Between the omnipresence of Black Death displayed via the very public execution of unarmed Black bodies  (as most recently reproduced in the case of Walter Scott), and the perpetual anti-Blackness I experience every single day in academia, I’m finding that I do care. I care a lot. Yet, I’m growing so weary of it.

This weariness is the exact goal of modern racism. Just wear Black people down until we have no fight left. Just bludgeon us on all sides until we can’t even figure out a plan or mode of attack (or defense). I feel like they’re winning at it too.

I used to use the term “micro-aggression” to describe my daily battles with Whites and non-Black people of color (NBPoC) who reproduce White Supremacist oppression. But, I have grown and matured. My race-related lexicon has expanded. I have more flowery words to describe this limited term now. Truth is though: microaggressions aren’t micro at all. They are a part of a macro-level system of White supremacy and White privilege which systematically isolates and excludes Black folks from equal access to justice, representation in politics, respect in the public sphere and from institutions, and opportunity for social mobility.

Micro-aggressions are symptomatic of macro-level racial aggression. Calling this White Supremacist aggression by a cute name which minimizes it and makes it seem encapsulated in the humdrum-ness of the interpersonal sells short the fantastically grand intention of racial hatred: to perpetually exclude, marginalize, and criminalize Black bodies.

Why am I saying this? Well, because in just this week, I have faced so many of these aggressions that, even though it is only Thursday, all I want to do is crawl into fetal position and eat Rocky Road ice cream while sideways watching brainless movies like “Battleship” and “Wrath of the Titans.” Don’t judge me.

Dealing with the onslaught of White, male trolls who wait, poised in the darkest corners of the internets awaiting tragedies in the Black community so that they can demonize and berate Black people on social media has grown entirely old. Interacting with students and faculty whose world views inherently exclude the concept that Black people experience the world differently is tiresome. And constantly feeling like being publicly Black is considered a cultural failing is becoming a part of my daily grind. These are not processes of micro-aggressive behaviors. These are the products of an unaddressed, implicit institutional racism that is embedded is every social structure in the US.

Not only that, these phenomena are indicative of the transformative nature of institutional racism as it is capable of breaching the psycho-social boundary even for folks who are well-meaning (remember what I told you in my piece about Starbuck‘s?)

Even as I write this, I am experiencing anti-Blackness. I walk in a room to write quietly and the young White woman who was already here reading packs up and goes next door. Moments later, a South Asian woman in my program walks in, heads into this room, looks up to see me there, and then turns tail to go next door as well. Then, there are the moments when my skin acts as a cloaking device. I will find myself repeating an answer to a question in a class only to have no one “hear” me. This is quite a feat given my deeper, louder voice. Moments later, someone else will repeat what I have said but everyone hears them because, well, a non-Black person said it.

What exactly makes these experiences “micro”? They just feel like plain ol’ racial aggression. They are expected. They have become a part of my normal day. For many Black people, they are the norm. And, they are always disconcerting, isolating, and exclusionary. What is “micro-aggressive” about that?

The psychological impact of these aggressions follows me each day as I attempt to be a mother, wife, doctoral student, friend, and citizen. Dr. Derald Wing Sue outlines this in her article “Racial Microaggressions in Everyday Life.”

“They [people of color] are often made to feel excluded, untrustworthy, second-class citizens, and abnormal. People of color often describe the terrible feeling of being watched suspiciously in stores, that any slipup they make would negatively impact every person of color, that they felt pressured to represent the group in positive ways, and that they feel trapped in a stereotype. The burden of constant vigilance drains and saps psychological and spiritual energies of targets and contributes to chronic fatigue and a feeling of racial frustration and anger.”

And, because many of these aggressions operate implicitly (there’s no way to know if people are leaving the room because I am Black or if they just didn’t want to be in here in the first place), it leaves me questioning my own dispositions. Am I just off-putting? Am I being overly sensitive? Is it me? Folks will rather have you believing something is wrong with you than ever admit that they are racist.

We can’t pretend as though the murders of unarmed Black men and women is different from regular old anti-Black racism and the corollary White Supremacy. While I am still here living to tell the story of my experiences, I am being killed just a little bit everyday. Each time I am disregarded, excluded, or treated as though I’m not the right kind of human, part of me has to compensate. And compensating means that I don’t get to be carefree. On the contrary, I am forced to place an inordinate amount of attention on the external forces which plague my existence everyday. That, frankly, isn’t living. That’s dying.