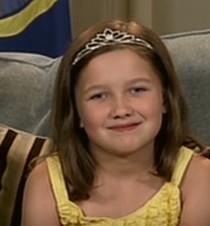 When I was seven-years-old, my father would frequently take me to a little theme park in Oakland, Calif. called “Fairyland.” It was tiny and a bit meager but it gave me a few hours to imagine life as a fairy princess. I had special keys that unlocked hidden messages and treasures. And, the entire park was like a faraway land bigger than my imagination. Even then, though, I was aware that the fantasy in the Park was just that, a fantasy. Never once did I ask my father to turn me into a real fairy princess. I was content in being me. But, I guess that just isn’t the way reality works when you’re the daughter of a White farmer in Virginia.

Jeremiah Heaton, father of Emily Heaton and the aforementioned farmer from Virginia, is now the official ‘King‘ of unclaimed land on the continent of Africa. After his daughter indicated she wanted to be a princess one day, he decided to take action. According to the Hollywood Reporter, “Like any good American dad not wanting to disappoint his daughter, he began searching for a region in the world that was disputed, alighting on a territory named Bir Tawil, an area between Egypt and Sudan. In June, he flew to the area, planted a flag and claimed it for himself and his family. They called it the Kingdom of North Sudan.” Because this is what it means to be a “good American dad.”

Heaton’s rise to “power” has been covered in the media as a cute father-daughter story – one that has already been picked up by Disney (shocker!). Some have argued against the film because the idea of the first princess of any country or province in Africa being White just seems preposterous. I don’t disagree with that contention. However, I would argue that Disney’s first princess of any African province was a lion cub. And, their only Black American princess spent most of her debut as a frog. So, this move toward an actual human is a slight improvement.

The filmmakers claim that the movie in the works will focus on the family adventure rather than the little White Princess of the Sudan. Whether we believe them or not (which we don’t) is neither here nor there. What is of greater concern is the underlying premise wrapped up in this phenomenon in the first place.

When little Emily decided she wanted to be a “real-life Elsa,” her family, rather than teach her about how the actual world works, chose to play the part in a fantastical lie making their family actual royalty rather than teaching her that not being a princess is okay too. Instead of coaching her through a pre-adolescent struggle with wants versus needs, desires versus limitations, privileges versus rights, they chose to simply buy her happiness. Why? Well because this is the core function of White Privilege. What one can’t get with merit, one can simple attain through financial, persuasive, or other power-based means.

These actions, while cute on their face, are not what many people I know would call being a “good American dad.” Rather, they point to an inability or unwillingness to teach children about how the world really works or at least how it should work.

In the real world, money shouldn’t be used to simply buy one’s way into a privileged position. Financial standing and discretionary income shouldn’t be the conduit through which young people experience the world. This story is not really about “good” parenting or a father-daughter adventure at all. It is really about the wool many Americans pull over children’s eyes to “maintain their innocence.” In the name of “proper” childhood, many Americans focus on fictional, aspirational, and otherwise, unrealistic stories and myths rather than honesty and age-appropriate reasoning.

The real issue with this style of parenting is that children who are parented via “disappointment avoidance” struggle with understanding what it means to operate within the boundaries that guide society. Some psychologists actually refer to this as “child entitlement abuse” – a form of parenting which stunts children who, later in life, are “never able to become fully integrated as a grown-up.” A particularly salient example of this is the case of the kid ‘diagnosed’ with “Affluenza“-  a “disease” which keeps affluent White people from understanding he difference between right and wrong. Yes, this is a thing. And, the Heaton family is a case study in the origins of this “disorder.”

While the family has since said that they will use the land for sustainable means, I’m not here for mythological parenting. I’m also not here for its foray into White Savior complexes either.

My partner and I are raising three children. Our oldest is seven years old. Just like me when I visited Fairyland, he understands the differences between reality and fiction. He knows that spending a day at a theme park doesn’t change him into an actual prince. He also knows that his life, devoid of any formal trappings of royalty, is wonderful and full of love. His sister, though she is only three, knows that she is a princess without us having to physically seize land on a distant continent. They know that they are not entitled to anything, that everyone in our household must work together to keep and maintain a certain order. And, our children are happy, well-adjusted, even-tempered, and overall, pleasant human beings.

We have invested our time, energy, and money into making our children better people. How great a place would the world be if folks like Jeremiah Heaton did the same?