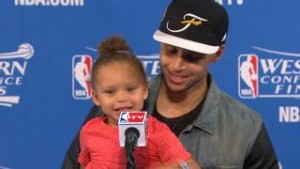 Steph Curry and his Golden State Warriors are headed to the NBA Finals. A big achievement in and of himself. But his postgame press conference showed who the real star in the family was.

Two year old Riley Curry first stole the spotlight during Steph Curry’s postgame press conference after Game 1 in the NBA Western Conference Finals. Amongst many things, she told her dad to be quiet, waves to the media, and hides under the table.

But after getting that experience out of her system, she took things to the next level after game 5.

This time around she stepped up her yawn game and laid down on the table.

And even spit a few Big Sean lyrics.

But nothing tops when she prompted an arena employee to hold her gum so she could play under a curtain.

A lot of commentators have criticized Curry for bringing his daughter along due to her distracting behavior. But damn it, that little girl is cute. And everything she is doing is way more entertaining than anything the adults are discussing.

I vote that for postgame press conferences during the finals, Curry answers all questions with “I’m just here to give Riley a stage” (a la Marshawn Lynch) and let her do her thing. That’s what we all want to see anyway.