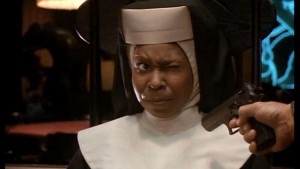 When I think back on my childhood, the Sister Act movies are firmly embedded within the fond memories. We’ve already highlighted how Whoopi Goldberg was everything back then (Blerdy Ish: 01. We Stan Whoopi Goldberg From the Nineties), and the duo of Sister Act films are two of her career’s crown jewels. But the clear and apparent money grab and cultural hijacking by Disney (almost sure to sully the brilliance of the original films) is something I cannot stand for.

The Hollywood Reporter broke the story this week, and the details are pretty sketchy at this early phase. But writers have been hired (Kirsten “Kiwi” Smith and Karen McCullah) and a producer (Alli Shearmur) has already been named.

Frankly, Sister Act is one of those “magic in a bottle” film franchises best left alone. Unlike other revived film properties like Tron, Sister Act worked for the time period it was produced in. Bringing it back now just feels odd. Whether Disney decides to make this a continuation of the current franchise with Whoopi passing the reigns to a new actress or make this a full modern-day reboot of the original, there is no way that the new film(s) will hold a candle to the originals.

In fact, does this story even seem halfway plausible in a world with social media and smartphones?

The only way I want to see another Sister Act film is if Lauryn Hill returns as Rita, grown up and facing a successful singing career now in decline. To rediscover her passion for singing, Whoopi’s Deloris VanCartier/Sister Mary Clarence counsels her to teach music at a convent (just like she did), and in taking the position, she learns that today’s youth don’t have and respect or knowledge of music’s history as they don’t recognize her. Through tough lessons, they learn to appreciate the past and she finds her love of music again.

There. Pull that off Disney. Then maybe you’ll get my patronage. Maybe.

Here’s a clip from Sister Act II to remind you how great it was.

What do you think about a Sister Act reboot? Yasss or nah?