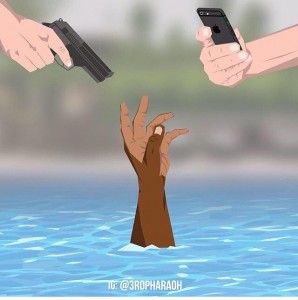 I saw a post on Instagram yesterday which evoked a visceral response from me. The image, by artist Kiakilli (@3rdPharoah), shows an outstretched Black hand, reaching for life out of troubled waters while one White hand points a gun squarely at it and another extended White arm focuses a cell phone’s camera lens. The image captures what has become a narrative in the daily state of affairs in the United States: the commodification of Black death and dying and its spectacular consistency in contemporary American life. But, the illustration’s implicit messaging captures even more than that.

The powerful image was obviously born out of the events in McKinney, Texas last week where an irate officer drew his weapon on bathing suit clad Black and brown teens at a pool party in a Dallas suburb. At the party, no one drowned to death. That is why the symbolism of the image is so striking.

The artist made it clear that it isn’t about drowning in water but in “systemic oppression.”

The caption on the image reads as follows:

“Black men and women are constantly drowning within “the pool” of systemic oppression without a hand to pull them out. The only hands above the surface are of police brutality and the manipulative media that submerge them deeper into the waters.

You cannot look at the #McKinney incident and other incidents alike without seeing the unnecessary aggression on those people. You see these children can’t enjoy themselves at a party without worry of being brutalized by those whom supposedly serve to protect them. The police are whom the innocent should fear the LEAST. However, having black children has become a crime as far as America is concerned. This needs to stop. Like and repost if you can. #blacklivesmatter#blackgirlsmatter”

I found this image and caption so moving because I couldn’t shake the imagery of the only outstretched hands for Black citizens in this country being those which seek to either murder them or “go viral” upon their death. On the one hand, police authorities, meant to protect us all equally, not only murder unarmed Black folks with impunity, they also (as seen in McKinney) terrorize Black citizens on a daily basis. In essence, when gasping for air in a country which tells us our bodies are too sexual, our hair is too kinky, our skin is too Black, and our intellect is too “ghetto,” we still have no structural authority in whom we can trust.

On the other hand, the outstretched arm of the news media presents a particular quandary. At first glance, it seems like the rampant onslaught of footage, like in the cases of Walter Scott and Eric Garner, is heightening the importance of citizen reporting. It seems at times like an effort to keep journalism and police authorities honest. However, what we’ve found is that these images of Black Death and despair don’t actually induce indictments, change verdicts or minds, or even challenge a status quo wherein Black are inherently “othered” by the White Mainstream. If anything, as Shanto Iyengar once suggested in his work on media framing, these images likely cause many Whites to justify harsher treatment of Black and brown people.

In one instant, the moment when the raised police weapon meets the camera’s angle, we see the very negotiation of Black humanity. We see this contingent space where Black bodies become hypervisible but Black humanity disappears. The gun’s dominion and the camera’s lens are the intersecting points at which Black citizens can no longer rest on constitutional rights, social norms, or community-based efforts to get free. We are slaves in this moment.

Now, this isn’t to say that the absence of the camera makes this sad reality any better, any more palatable, any further acceptable. I would argue it doesn’t. Many Black people have been killed off-screen (like Rekia Boyd, Renisha McBride, Trayvon Martin, Jordan Russell Davis, Micheal Brown, and Aiyana Stanley-Jones). The injustice of their deaths is no less valid, less important, or less significant in understanding how systemic oppression works.

However, my argument is simple: the presence of both the incessant and ubiquitous death of Black folks and the camera’s all-seeing eye works to perpetuate and maintain myths of Black criminality in this country. The footage doesn’t clear our ledger. Instead, it fills in the blanks in the racist White imaginary. It is the Technicolor pixelation to the White bigot’s moving picture. It doesn’t make us safer. It doesn’t make us better. It doesn’t make us anything but footage.

This is why having dash cams, or vest cams, or pocket cams, or any cams on cops won’t do a thing. That’s like prescribing steel panties to young women on college campuses to deter rape. We. Have. A. Problem. We won’t solve it if we don’t call it out for what it is. Under these conditions, we will never achieve or understand freedom.

And, frankly, I’m trying damned hard to get free.