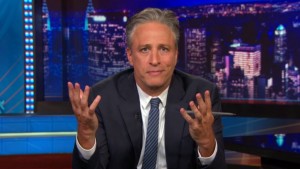 I guess the title is more a of rhetorical device. I think we all know why everyone cares so much that Jon Stewart “dropped the mic” Thursday with his words on the massacre at Charleston’s historic Emanuel AME Church (often called “Mother Emanuel) which left eight Black congregants and their pastor, the Honorable Rev. Clementa Pinckney, Wednesday night. Simply, it’s because he’s a straight White guy. But, there’s more to it than that.

The headlines erupted with reactions to Stewart’s words. The Washington Post called it a “blistering monologue.” Rolling Stone called the speech “heartbreaking.” Meanwhile, the New Yorker turned up the drama a notch calling it “Jon Stewart’s Charleston Despair.” Despair y’all. Apparently Jon Stewart is in a state of despair.

Full admission here: I stopped watching the Daily Show last year when a friend of mine was personally harmed by the after effects of the #CancelColbert campaign. Seeing Stewart’s disregard for the concerns of women of color put a sour taste in my mouth that I just couldn’t shake. It was around that time that I  stopped believing that the American news media could be redeemed. Even the well-meaning, liberal news outlets were showing their slips.

What is particularly disturbing about this brand of social activism (which I have previously discussed) is that many White people don’t actually see it when it’s happening. The fact that so many news outlets expressed the emotional impact the Emanuel AME massacre had on Stewart tells us something very particular about what it means to be White in this country. It means that when nine Black people are murdered in cold blood in a church (after praying for their murderer and treating him with immense kindness), some Whites are still going to want to hear the reaction from the “objective” White friend. The event itself, apparently, isn’t heartbreaking enough on its own. It needs verifiable White guilt and tears to give it that extra heft.

Almost every top web news outlet covered Jon Stewart’s reaction to the tragedy. Just think about how many stories of death, murder, and violence against Black communities they aren’t covering. When Black cis and trans women are murdered in the street, kidnapped, raped, burned alive, and brutalized by police officers, these very same outlets devote little to no coverage to their stories. Names like Islan Nettles, Rekia Boyd, Marlene Pinnock, Arnesha Bowers, Miriam Carey, and Tiara Groves receive nary a word or a mention on their pages. But, Jon Stewart? He’s in despair.

A little five-year-old girl survived the massacre on Wednesday by “playing dead” with her grandmother. And, while we have heard about it in the news, we probably heard about it first in a tweet from a White woman. She wrote, “A 5yo black girl survived last night by playing dead. Surely my 6yo white son can survive a conversation about why she matters.”  Even this sentiment is the embodiment of White Privilege.

A 5yo black girl survived last night by playing dead. Surely my 6yo white son can survive a conversation about why she matters.

What this tweet is meant to do is anchor Black pain in the pain of White people. By conflating the experiences of this little Black girl surviving the wrath of a premeditated murderer with the pseudo-pain of a White child having to face race, this White mother fed into the belief that Black pain is inherently less important, less real than that of Whites. In this case, White people are the referent. They are the lens through which we are allowed to experience the targeted exclusion and eradication of blackness.

As her fans, friends and followers praise her for her courage in writing these 140 characters of well-meaning lip service, they invariably miss the point that her writing it is yet another erasure of Black pain. Its being retweeted over and over again underscores how many Whites and people of color have internalized a racial order which firmly places Whites above everyone else. They are the beacon on the hill. Therefore, their pain, their trauma, their hurt, no matter how small in the grand scheme of things, trumps our’s (Black people’s) unilaterally.

Yes, the reason why everyone cares so much that Jon Stewart spoke about the massacre at Emanuel AME Church is because he is a straight White Guy. But, as seen above, not only straight White guys benefit from this privilege.

The deeper more diabolical reason is because Americans, by definition, don’t care about the lived experiences of actual Black people. Whether intentionally or not, many Americans believe that White men are the “true” citizens, the rest of us are just trying to get a seat at the table. In this way, Stewart was able to “drop the mic” on Thursday because he was already holding it. We, Black people, activists, writers, and the like, are still sitting in the rafters, shouting at the Jumbotron, hoping the camera will pan around so we can get a moment of airtime.

I’m not sure how to solve this issue other than calling it out for what it is. This isn’t an attack on White allyship. It isn’t an attack on “all White people.” But, it is a critique of the ways in which White Privilege permeates even liberal, socially-active circles. And, hopefully, it shines light on the fact that even when we look like we, Black people, are getting free, we might not be.