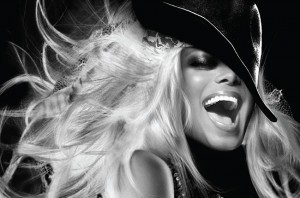 It was just one month ago that Janet Jackson announced a new album and “Unbreakable” world tour. And now, we’ve got our first taste of what new sounds Miss Jackson has been developing.

Her new track “No Sleeep”sounds reminiscent of songs from her landmark albums janet. and The Velvet Rope like “Got Til Its Gone,” “That’s The Way Love Goes,” and “I Get Lonely,” (recently featured on our Blerd Summer Playlist). This new sound, laid-back yet brimming with energy, may sound familiar because she worked with music industry legends Jimmy Jam and Terry Lewis on the track.

Her unmistakable whispered voice is as sensual as ever as she tells her lover “We ain’t gonna get no sleep.” When she launches into the bridge, she puts a bit of strength behind her delivery. It’s not exactly what she is known for, but the effect is pleasantly refreshing.

As easy listening as the song is, it definitely doesn’t have that “storm the charts” feel, though I’m sure the track will get a heavy dose of spins based on her name alone. The song seems a better fit as album filler. Regardless of that, “No Sleeep” has an alarmingly catchy chorus for such a sleeper of a song.

It has also been revealed that the upcoming BET Awards will feature a tribute to the pop singer. Details are sketchy at this point, but rumors state that the performance will include a lot of dancing and appearances by the likes of Ciara. We’ll see if Mrs. Jackson decides to cap it all off by taking the stage herself.

Stream “No Sleeep” below and we’ll keep you posted on more developments from her comeback!