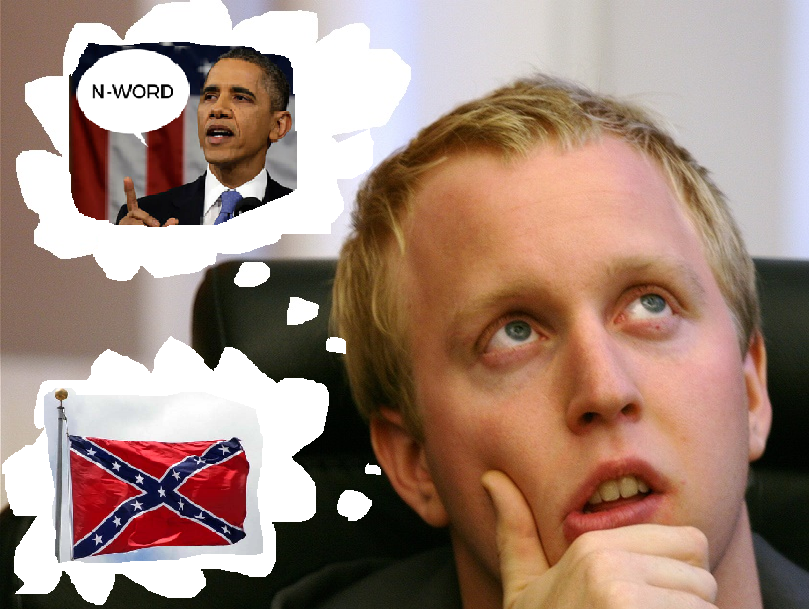 During my first quarter of grad school, I read some powerful words about the interaction between antiracism and antiracialism. These words resonated with me mainly because I frequently saw many White Americans struggling with how these two, very different ideologies work in modern society.

In his book, The Threat of Race, David Theo Goldberg wrote “there are crucial moments when the necessity and complexity of this connection are lost sight of, and antiracism reduces primarily, principally, or completely to antiracial commitment, to antiracialism. At these moments, the end of racism is confused with no more than being against race, the end of race substituting…for the commitment to  – the struggle for – ending racism.” In essence, many people confuse being against racism (and seeking to end it) with being against anything which is construed as “racial.” Hence, the new wave of “colorblindness” in the United States. This week’s flurry of confederate flag (spelled with a lower case intentionally) rebuffing, and President Obama n-word pearl clutching perfectly depicts the core differences between antiracism and antiracialism.

To begin, President Obama made very poignant remarks about racism when he appeared on the “WTF” podcast with Mark Maron on Monday.

He said, “The legacy of slavery, Jim Crow, discrimination in almost every institution of our lives, that casts a long shadow. And, that’s still part of our DNA that’s passed on. We are not cured of it. ” President Obama continued, “Racism. We are not cured of it. And, it’s not just a matter of it not being polite to say nigger in public. That’s not the measure of whether racism still exists or not. Societies don’t, overnight, completely erase everything that happened two to three hundred years prior.”

His point – that just because racism is implicit and hidden from public eye doesn’t mean it is gone – was completely missed by many conservative Whites who just couldn’t get past the fact that he said the word “nigger.” Some were so frustrated that he would use a word they aren’t allowed to use in public that they embodied precisely what he was saying in the first place.

Because the n-word is racial and scary to many Whites, they would prefer it never be said rather than address the core logics and historical underpinnings which birthed the ideological support for its use over the past three centuries. This, was President Obama’s key point. Sadly, many Whites have completely missed it because their committment to ending the concept of race preempts their desire to squelch the terrors of institutional racism in America. 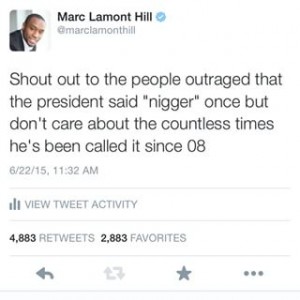 Articulated clearly in Marc Lamont Hill’s tweet (above), not using the word “nigger” doesn’t erase the sentiments which created it. Nor does this performative action of speech control and respectability ensure that the violence against Black Americans because of the word will end (obviously). Racists can still think about the word. Believe the core concepts of the word. Act on the exclusionary and “othering” tenets of the word. Or, even use substitutes for the word. Therefore, saying it or not saying it isn’t an act of antiracism. It is an act of antiracialism.

A similar phenomenon of White confusion happened this week with regards to the confederate flag waving in South Carolina. After the massacre at Emanuel AME Church last Wednesday, many liberals and activists have called for the removal of confederate flag merchandise, paraphernalia, and symbols across the country. While some vendors, like Wal-Mart, eBay, Amazon, and Sears have agreed to stop selling these violent products, the flag still waves in many capitols and state properties in the South. But, many Whites have latched onto this fight to remove the flag (given its prominence in terrorist Dylann Roof’s life prior to murdering nine Black Americans last week). Many see this as a major victory in ending racism in America. Sadly, they’re confused about this too. 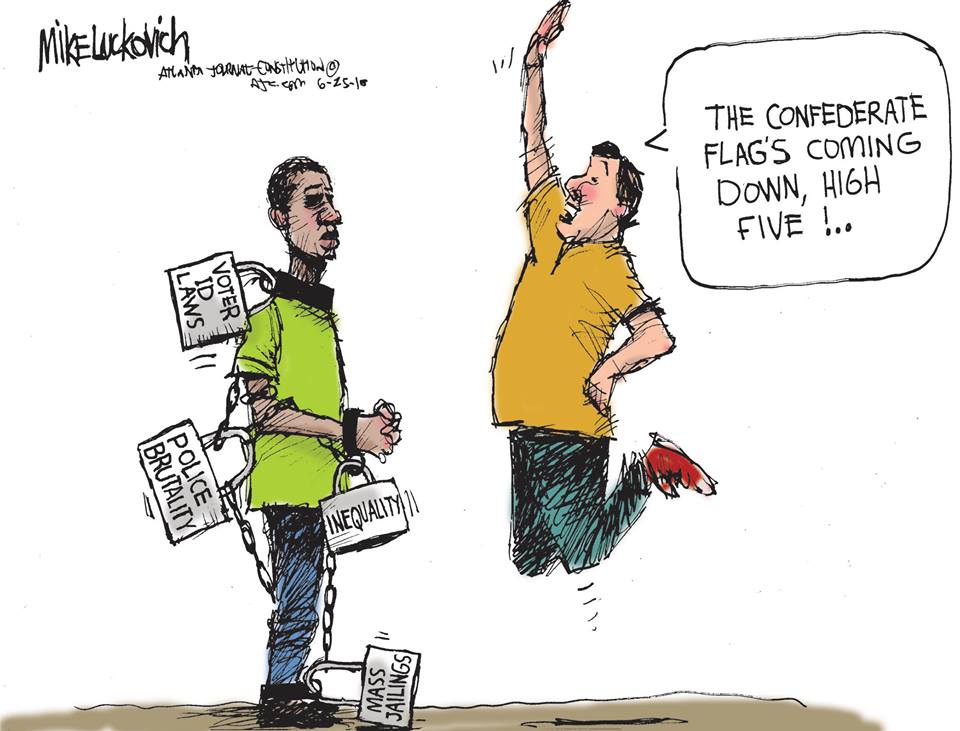 Yes, the flags should come down. Frankly, they should have come down a long long LONG time ago. But, that’s besides the point. The White people who think this change will formally end any form of racism in this country are, again, mistaken. The confederate flag is a symbol of racism just like the nazi flag. It being a symbol of “pride and heritage” in some southern states is a daily reminder to Black Americans of the revelry many Whites still have in a culture committed to their eradication. This was what the confederate states were all about. And, they were unapologetic about it. Sadly though, removing it, like banning the n-word from public discourse, won’t change the sentiments that drive the sales of confederate flag merchandise or inspire racist White folks to hang the symbol in their front yards. People will continue to be racist. Taking away their mascot won’t destroy the sport.

Some may critique my argument noting that this White “confusion” is also a form of racism. I don’t disagree. I just think there is more to it than that. The fact that racism in the United States has maintained, transformed, and cloaked itself so convincingly in antiracialism is worth discussing separately from racism en masse.

While White folks are doing victory laps about their exclusion of the n-word from their vocabularies and protests of the confederate flag, Black Americans are still fighting against injustice at the ballot box, on street corners, in classrooms, in the workplace, and just about everywhere else in the United States. The ability to not see race, to fight against race as a thing in and of itself, is a form of racism. It doesn’t end racism. It covers it up until the next generation finds an interesting way to make it seem like something else.

Until we understand and acknowledge the core differences between antiracialism and antiracism, we will literally never develop a way to justice and equality. So, for that reason alone, I think this conversation is worth having.