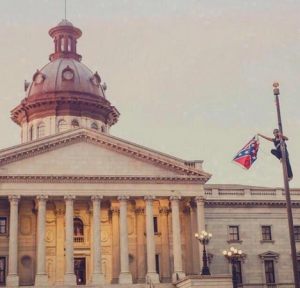 Bree Newsome, a 30-year-old activist, singer, and filmmaker from Charlotte, North Carolina took the initiative to climb the flagpole where the confederate flag (spelled with a lower case intentionally) hung over the South Carolina state capitol. This act of resistance was primarily motivated by the hate crime and massacre committed at the Emanuel AME Church last week where 21-year-old Dylann Roof murdered nine Black congregants in cold blood. This cruel act of terror has shone a light on this country’s commitment to White Supremacy and our especially difficult history of symbols of systemic racism.

According to Vox, Newsome shouted “We come against… hatred, oppression, and violence. I come against you in the name of God,” as she climbed the flagpole. “This flag comes down today,” she said resolutely.

In a press release sent to the Guardian, Newsome wrote the following:

“We removed the flag today because we can’t wait any longer. It’s time for a new chapter where we are sincere about dismantling white supremacy and building toward true racial justice and equality.”

So, clearly, Newsome was on a mission. A mission which she courageously completed.

Given that there is literal footage of Newsome scaling the pole, removing the flag, then peaceably submitting herself for arrest, why are there murmurings that there was a “team” behind her? That she was “chosen” by a movement for a particular reason? Why pretend like this Black woman didn’t have agency and presence of mind to say, “I, Bree Newsome, am going to take down that flag” when no body else would do it? Even if she were chosen, why would that outweigh her willingness to risk her own safety?

Yes, the flag went back up relatively quickly. But, a Black woman was the one who took it down. There were no invisible men to give the credit to. There was no hidden team pushing her up the pole. Hell, most people wouldn’t have had the physical prowess, let alone the nerve, to climb the pole. So, who are any of you to undermine this woman’s activism?

Some have compared Newsome to Rosa Parks. They note that Parks was the face of a movement but there were many working to bring her activism to the fore. While this may be true, Parks was a long time activist and member of the NAACP. She wasn’t some random face. She had agency. She knew what she was doing when she refused to give up her seat.

While Newsome’s actions were likely related to the #TakeItDown campaign pressuring leaders in Mississippi and South Carolina to remove the flag, it doesn’t mean that her personal efforts to do so should be diminished. Like the ahistorical narratives of Parks, some have suggested that Newsome’s acts should be seen as a part of a larger era of civil disobedience and resistance. Others (with large platforms) have simply inserted themselves, acting as though they had a hand in her actions today. The fact is though: when there are literally three things present, a Black woman, a flagpole, and a confederate flag, it’s absurd to suggest that anyone else should be recognized, acknowledged, and or, simply, thanked for this symbolic act.

It’s sad, but even perched atop a 30-foot pole, Bree Newsome was invisible. Black women all over this country (like the three Black women who started #BlackLivesMatter) are rendered invisible by this society’s committment to racism and misogyny. 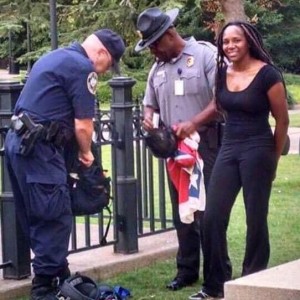 This isn’t the first time that I have written about Black women’s hypervisible invisibility. I’m sure it won’t be the last. But, this point of existence where one’s physical presence is overshadowed, masked, and made unseeable due to the ideological misgivings and misogynoiristic commitments of societal actors is, frankly, exhausting. While it is usually non-Black people who erase Black women, even Black men (as seen in the recent Dolezal incident) participate in this process as well.

The erasure and repression of Black women in social movements and political activism has to stop. It’s pathological. It’s deep-seated. And it has to stop now.