7 Reasons Michael B. Jordan is the Next Denzel (or Better) 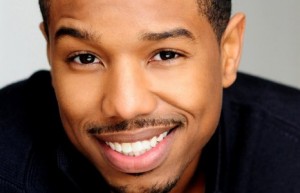 Michael B. Jordan is taking Hollywood by storm, landing high visibility and franchise leading roles. In our eyes, there is no doubt that he is our generation’s Denzel Washington, and we’ve got seven reasons to prove it.

1. Stallone is passing the Rocky torch to him

There have been 80 bazillion Rocky films, and Stallone is making another one. Except, Rocky isn’t the main character. In Creed, Jordan’s Adonis Johnson, son of Rocky rival Apollo Creed, is. And truth be told, he looks believable as hell.

In the film, Stallone’s Rocky Balboa trains the young fighter, while Phylicia Rashad stars as his mother and Tessa Thompson fills the love interest slot. On paper, it almost sounds like Sylvester Stallone was just trying to find a way to make a Black film.

How much of a boss do you have to be as a Black man to take the role of Johnny Storm (aka the Human Torch)? I mean, this is the most popular character from Marvel’s “First Family”. He is the cool one. He’s only been portrayed as white since the comic debuted in 1961. In essence, Jordan looked at 55 years of history and said”Fuck It.”

This is as if Idris Elba woke up one morning and said that he wanted to play Wolverine. Or Zoe Saldana had her mind set on playing Wonder Woman. Or Jamie Foxx announcing that he is the next Batman. It’s that big. And in the face of fanboys and fangirls whining about it from every corner of the internet, he still gives no shits.

3. He doesn’t shy away from talking about race

In all of the furor that surrounded him being cast as Johnny Storm in Fantastic Four, Jordan kept his cool and refrained from Twitter rants. For months, he either quietly defended himself or just ignored the haters. But when the fires refused to die, he took matters into his own hands. Instead of making comments to reporters or putting out a press release. Jordan wrote an op-ed for Entertainment Weekly titled “Why I’m Torching the Color Line”.  wherein he let’s everyone know that he understand the position he is in while dusting off the haters as ignorant of “what a modern family looks like today”.

“Sometimes you have to be the person who stands up and says, ‘I’ll be the one to shoulder all this hate. I’ll take the brunt for the next couple of generations.’ I put that responsibility on myself. People are always going to see each other in terms of race, but maybe in the future we won’t talk about it as much. Maybe, if I set an example, Hollywood will start considering more people of color in other prominent roles, and maybe we can reach the people who are stuck in the mindset that ‘it has to be true to the comic book.’ Or maybe we have to reach past them.”

4. He is a respected, serious actor

If you have not seen Fruitvale Station, head over to Netflix now and watch. Despite it being snubbed from Oscar nominations during its year, Fruitvale Station showed how incredibly nuanced Jordan is as an actor. Oscar Grant’s story was a mainstay in the news cycle for awhile, so we knew the inevitable end of the film. Still, Jordan was able to make every moment of screentime feel important and not-to-be-missed. He turned a news story into a human story. And in an industry seemingly obsessed with period films featuring Blacks as slaves, he wowed critics with a contemporary story.

Did you see That Awkward Moment? I did, and I didn’t like it. So no recommendation there. But White folks ate that movie up like mayonnaise sandwiches. And in that movie, Jordan stood shoulder to shoulder with Zac Efron and Miles Teller, two of the most ubiquitous young, up-and-coming White male faces in Hollywood. He also held critically-acclaimed roles on Friday Night Lights and Parenthood, two shows beloved by White folks.

White people have invited him into the fold, despite him not playing into White Supremacy beliefs {cough} Anthony Mackie {cough}. Find me some other actor making these types of moves. 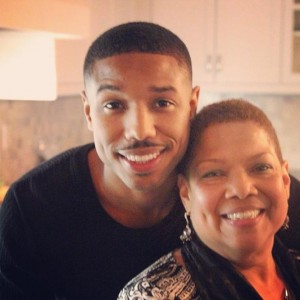 Just when you think he’s all about himself and his craft, Michael B. Jordan does philanthropic work that is personal, important, and unexpected. If you didn’t know, Jordan serves as a celebrity ambassador for Lupus LA. Why Lupus LA, the organization for which Toni Braxton serves as the Ambassador Chair? Well, his mother has Lupus. And when he accepted the Loop Award this past June, he had this to say:

“Lupus L.A. has given my mom incredible encouragement and has also provided her vital support and services, but what Lupus L.A. has done for me was finally give me an opportunity and a way to help my mom. As an actor I’m lucky enough to wear a costume as a member of the Fantastic Four, but I can think of no greater superhero than my mom.”

Everybody loves HBO’s The Wire. It’s the hardest story about drugs, guns, and the mean streets of Baltimore to ever have been told. It starred Idris Elba, Wood Harris, Lance Reddick, and a cavalcade of other Black actors. Yes, a cavalcade. It was nominated for two Emmys. And people are still hurt after he was killed. The series left such a mark on the world, and Black culture specifically, that I know all of these things without ever seeing a single episode. his performance in The Wire is proof that he’s always had it.

Granted, many folks reading this will want to add an eighth reason to this list (probably cause you all think he is a handsome devil…and he is). But, no matter what you think of his looks, Michael B. Jordan is taking over Hollywood, unapologetically. We can’t wait to see what else he has in store.