The Supreme Court Has Been Killing the Game on Equality 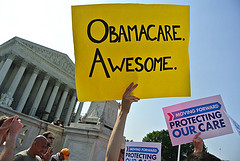 After what seems like eons of terrible decisions from the Supreme Court of the United States, the past few weeks have offered a glimmer of hope amidst an otherwise abysmal narrative from the Capitol’s preeminent judicial body.

Here are three recent SCOTUS decisions that are guaranteed to move us at least a smidgen towards equality.

On June 25, the SCOTUS ruled in favor of President Obama’s capstone legislation, the Affordable Care Act or “Obamacare.” Granted, I predicted this outcome back in 2013. However, Republican opposition to the law has been consistent since President Obama’s election. This final ruling upholding the legislation’s federal subsidies seems to be the nail in the proverbial coffin for all of the GOP candidates who were hoping to reinvigorate this debate in the 2016 election cycle. There is still chatter that Republicans may continue to beat this dead healthcare horse but, at least for now, the book is closed.

On June 26, the SCOTUS legalized marriage for all citizens in the United States regardless of sexual orientation. Although 37 states already recognized same-sex marriages as legal, 13 did not. Citing the 14th amendment, five Justices found that states could not legally deny marriage licenses to citizens of the United States. This decision seemed to be a foregone conclusion as so much of the country had already moved away from the denial of rights to same-sex couples. Now, this ruling confirms that all citizens will have rights to love and matrimony if they so choose.

Just a few days after the landmark decision on same-sex marriage, the SCOTUS ruled, in Johnson v. the United States, against key pieces of the “Three Strikes” sentencing laws. Specifically, the Court heard a case focused on the 15 years to life sentencing of accused criminals who have already been convicted three times for “serious drug offenses” or “violent felonies.” They found that there were far too many broadly-defined cases which could fall into the categories of “serious” or “violent.” Thus, they overturned this portion of the Armed Career Criminal Act. According to the Grio, “The Court declared that the clause was unconstitutionally vague in its definition of what was “violent” and that therefore the law was imposing undue sentences on the people.”

Overall, these rulings grant further rights to same-sex couples seeking marriage, lower income Americans who rely on low cost federal healthcare, and Americans who have served their time and seek to move away from the criminal justice system. If there were any groups in need of support and affirmation from the SCOTUS, is was certainly these. We aren’t done yet, but these decisions have moved the needle just a bit closer to equality.