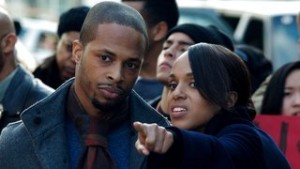 We said this was coming, and it appears our hunch is indeed fact. Cornelius Smith Jr., who played community activist and troubled mayoral candidate Marcus Walker, will be a series regular on Scandal next season.

Of course there are no official details as to what capacity he will be in for his return (his political career is officially kaput), but as we alleged, we think he’ll be OPA’s newest gladiator.

He really is the perfect fit. Since Harrison’s demise, OPA’s has been seriously lacking in the morals and ethics categories, more or less operating as a black ops team. Things have been so dark in the office that is seems like they don’t even turn the lights on anymore. And with Abby still posted at the White House, Liv could use some staff with skills other than subterfuge, marksmanship, and torture.

My biggest hope is that finally closing the book on B6-13 and putting more of the focus on OPA will get the show back to basics (aka what made it so great on the first place). And who knows, maybe Marcus can at least find the light switches again.