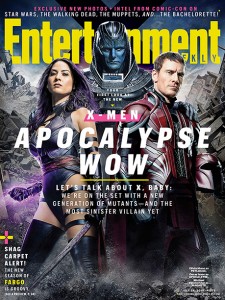 Entertainment Weekly has released new high-quality images from X-Men: Apocalypse, and from the looks of things, this is shaping up to be the best X-Flick ever.

This is our first official glimpse into what some of our favorite mutants will look like in the Bryan Singer directed film. The first character that pops out is the imposing figure of Apocalypse. He has been drawn a plethora of ways in the comics, but this iteration seems to be a happy medium between the massive hulk of a mutant he can be and an actual human. Without motion or audio, it just looks like a lot of makeup, prosthetics, and costume, but I can see this playing nicely on screen.

The second most eye-catching character is Psylocke, a fan-favorite from the comics that is finally getting a real cinematic portrayal. In this faithful incarnation played by Olivia Munn, she sports a skin-tight suit with purple highlights and her trademark red sash around her waist. This has to be one of the most spot-on costuming jobs done in any of the X-Films to date.

Other important things to note from the images are confirmation that Storm, played by Alexandra Shipp, will be rocking the infamous mohawk that has been so popular in the comics, Magneto is even more imposing in upgraded red body armor, and Mystique seems to have gone back to her “blending in” appearance in the wake of the events from X-Men: Days of Future Past.

Click through the gallery below to also see new recruits Sophie Turner as Jean Grey, Tye Sheridan as Cyclops, Kodi Smit-McPhee as Nightcrawler, and Lana Condor as Jubilee. X-Men: Apocalypse will be in theaters May 27, 2016.