Serena Williams, Black Womanhood, and Why I Wanted to Be a Boy 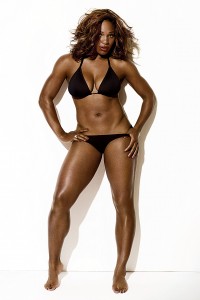 One day, my nine-year-old self asked “Mom, can I cut all my hair off?”

She responded with “Why?”

At that young age, I associated my physical presentation and image with my sex and gender.

Back then, I was conditioned to believe that boys were supposed to like girls and vice versa. Boys had short hair and girls had long hair. Boys wore pants and girls wore dresses. But, when I looked in the mirror at my lanky, awkward and unfeminine frame, I didn’t see long hair. I rarely wanted to wear dresses. I wasn’t just attracted to boys. So, was I a girl?

By that age, I was already five-feet-eight-inches tall and played a number of competitive sports. My body didn’t really fit in with the other girls’ physiques. They were buying bras and I was buying Jordan’s. I looked more like the boys in my classes, especially when I wore cornrows and hoodies. In my elementary understanding of sex and gender, I thought I could change into a boy by changing how the world saw me. I wanted to change myself so that I made more sense, so that I would be in better alignment with the very narrow definition of girlhood I had been programmed to believe in.

A recent New York Times article uses much of that same elementary logic I used to analyze myself in the fourth grade. The story focuses on the legendary tennis player Serena Williams, whose continued annhilation of White female tennis players has been confounding White bigots for at least a decade. But, instead of questioning the inability of those White female tennis players to defeat her, Ben Rothenberg decided to focus on her “body image.” Why? Well, because rather than explore their White fragility in the face of Black Excellence, they would rather discredit Williams’ womanhood and, therefore, her deservingness to participate in the sport altogether.

In the article, the author says that Williams has “large biceps and a mold-breaking muscular frame, which packs the power and athleticism that have dominated women’s tennis for years. Her rivals could try to emulate her physique, but most of them choose not to.” The focus on Williams’ body parts implies that her skill lies merely in her physical prowess. As if she has not been working at this profession for nearly twenty years, this suggests that her achievements are devoid of mental capability or other personal commitment. By minimizing Williams’ talent to arms, legs, and buttocks, White people who are threatened by her athleticism can excuse their own shortcomings and lack of talent without pause. This a key component of White privilege.

To really drive home the bigoted views many have of Williams’ body and Black women in general, the author quoted the coach of Garbiñe Muguruza (who later lost to Williams in her 21st Grand Slam Wimbledon title). He said, “It’s our decision to keep her as the smallest player in the top 10…because, first of all she’s a woman, and she wants to be a woman.” In this statement, Muguruza’s coach does three things: 1) he associates womanhood with being “small,” 2) he implies that Williams doesn’t “want” to be a woman, and 3) he presents womanhood as something that is static that we can simply move in and out of via public presentation and performance. Sadly, Rothenberg’s writing does nothing to counter these implications.

In many ways, this amateurish encapsulation of womanhood is as ill-informed as mine at nine-years-old. The assertion that womanhood has very particular boundaries (like size requirements) excludes women – like me – who are extremely tall, or less slender. In Williams’ case, it is her natural shape that the author frames as out of the norm for womanhood. Well, that, and because she’s Black.

Even more perplexing is the idea that petite women “want” to be women while others do not. This makes womanhood seem like a wardrobe change or new lipstick. And, somehow, Williams has opted out of it by virtue of her natural athletic physique.

If many women’s bodies, especially Black women, do not conform to this narrow definition, what does that mean in terms of how the White Gaze conceptualizes Black womanhood at-large?

To answer this question, Dr. Brittney Cooper correctly asserts that “There is nothing wrong with gender-noncomforming, female-bodied people embracing masculinity, but there is something wrong when femininity is viewed as exclusive to white womanhood.” Specifically, when it is exclusive to moderately tall, slender White women like Muguruza or blondes like the highly marketable Maria Sharapova. This conception of gender is not only racist and misogynist, it is also transphobic. 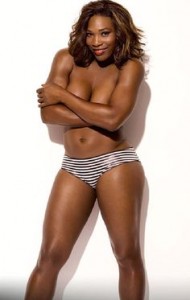 By presenting womanhood as an unmoving, unflexible plane that we pass through when we “want,” this narrative subscribes to the limited thinking that animates sexism and misogyny. If womanhood is not defined and redefined by actual women (whether “feminine”, “masculine,” or otherwise), what exactly is it? Who gets to define it? In this scenario, it sounds like Rothenberg and the male coach quoted believe that men get to define womanhood. They seem to be saying that the male gaze is the point of reference for the articulation of Black womanhood and femininity. Therefore, the socially conditioned and historically rooted preference for White womanhood dictates that Black womanhood be invalidated.

However, this couldn’t be further from the truth.

Williams is living proof that Black womanhood comes in a range of sizes, shapes, colors, and creeds. She, like me, breaks the superficial boundaries that men impose on women and womanhood. In fact, Serena Williams’ authentic existence is, perhaps, the best thing for Black womanhood at this moment because she challenges the exclusionary norms of what it means to be a woman in modern society. With finesse, she both embraces her body and dispells the myth that Black womanhood has to fit any existing norm. She unapologetically reclaims her body in the face of White Supremacy despite continued attempts to defame, disregard, and erase her.

She does what took me quite some time to do.

After a while, I figured out that I didn’t really want to be a boy. What I really wanted to be was a complete version of myself. I wanted to be a tall, athletic girl who sometimes liked people who didn’t identify as male. I wanted to rock a short ‘fro or long braids without anyone questioning my gender. I wanted to be me, the fullest version of whatever that has turned out to be. I had to choose me over what society projected back at me.

Once these commentators, onlookers, and media personalities come to terms with their insistence that all women look like small, thin (probably White) women, we will all be able to exist more freely. For now though, we have articles like these, making problematic generalizations, and reminding those of us who work for social justice that we have a lot more work ahead of us.