“All Lives Matter” but the KKK is Marching in 2015 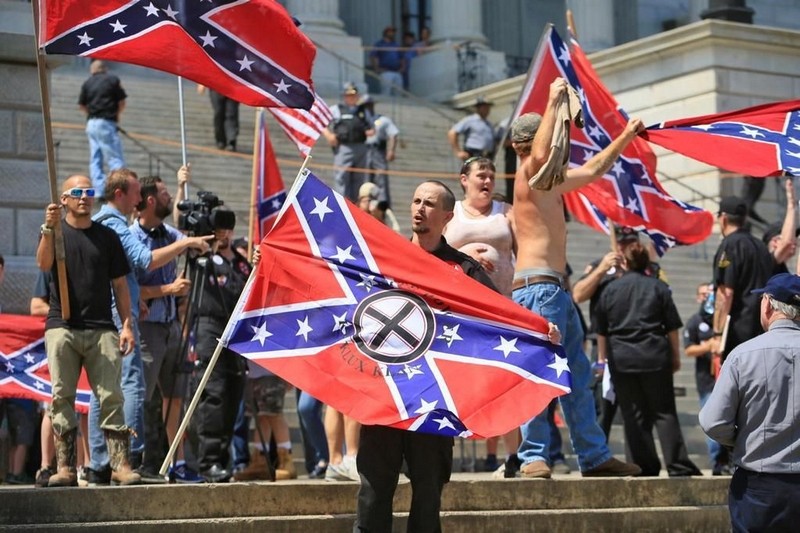 I mean, I wonder about that but I don’t really wonder because I know it doesn’t happen that way. The events of last week alone sum up how difficult it has become to be Black and free in America. And, they’re further evidence  that the “all lives matter” narrative is meant to pacify rather than empower Black people.

Last week, a young Black woman with a new job, a bright outlook, and a life ahead of her was found dead in a Texas jail cell after a “routine” police stop for her failure to use a traffic signal. Her name was Sandra Bland. She was only 28-years-old. Within days, another young woman named Kindra Chapman was found dead in an Alabama jail cell just over an hour after she was booked. She was arrested for allegedly stealing a cell phone and was just 18-years-old.

Both women’s’ deaths have caused many to question how this happened. Many on Twitter struggle with placing themselves in a similar position. The hashtag #IfIDieInPoliceCustody has given voice to the fact that many Black people face the reality that they are one traffic stop or petty arrest from death in this country. But, you know, “all lives matter.”

Like the continued assault on unarmed or arrested Black men and women, Black churches continue to burn in the South. After a string of six churches caught fire following the massacre at Emanuel AME Church, yet another church, Houston’s Fifth Ward Missionary Baptist Church, has been set ablaze last week.

And, like a 1920s antebellum nostalgia movie, images from a North Carolina Ku Klux Klan rally in support of the confederate flag show how many White people are committed to the systematic demise of Black Americans. Mainstream media outlets are framing this as a stand-off between the KKK and the “New Black Panther Party” but the fact is that the KKK does need a foe. They’ve never need Blacks to organize to validate their terror. They woke up like this.

These monthly, weekly, and daily events remind me that being a woke Black American is one of the hardest decisions I ever made.

Nearly fifteen years ago, I decided to be an engineer. I had dreams of making things better than they once were. I wanted to go to college even though I didn’t know how to get there or how I’d pay for it. Emulating the world around me, I tried to assimilate into whiteness for a while, thinking that my elite education, my hard enunciation of the King’s English “R,” and my idolization of White culture (see: Disney) would usher me into that promised land. You know, the one with the heterosexual nuclear family, the white picket fence, and the middle class lifestyle. However, I learned the hard way that my Black, queer body is unassimilable. More importantly though, I woke up from my gratuitous American stupor to realize that America’s darkest days aren’t necessarily behind us. So, I started fighting a system of oppression, not really knowing the technique, but fighting nonetheless.

Then, a few weeks ago, when a friend of mine asked me what I was fighting for, it freaked me out.  My normal canned responses of “White Supremacy” and “racism” were insufficient. They were too vague and predictable to really encapsulate what I was trying to get at. So, I landed on “existence” as the true goal of my fight. This, to me, is only confirmed by the recent killings and acts of intimidation against Black people around this country.

Folks telling us that “all lives matter” are simply asking us to ignore the mysterious hangings, the church burnings, the Klan rallies, the pool intimidations, the shootings of unarmed children, the hatred, the maliciousness, the fear, the…everything of modern Black American life.

The logic that allows these very same people to see the KKK – an official organization of racial hate responsible for the murders of thousands of Americans – marching down the street in 2015 yet demands that we root out evil around the world is astounding. A massacre just last month was linked to the Klan. Church burnings are linked to the Klan. But, all lives matter? Really?

This is the conundrum of blackness in the United States today. We persevere with the knowledge that every time we take a breath, we do so in direct rebellion against every single system and structure in this country. Every time we open our eyes and take in light, we reject the darkness thrust upon us by those who would rather see us dead. The moments we spend in conversation, collection, and community we steal from a divisive, segregationist state seeking to tear us from one another at any cost.