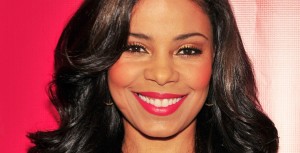 We all fell in love with her “girl next door” vibe in the 2000 hit Love & Basketball. Since then Sanaa Lathan has been coasting on a Hollywood career that is nothing to be ashamed of. Now, with her box office smash The Perfect Guy killing it in theaters, she seems to be veering off on a path to certain annihilation. She is making a series of bad decisions that threaten to torpedo the venerable career she’s been building for nearly two decades. It’s time for us to sit her down and set her straight.

Lathan (43) is one of those Black actresses. If a Black film is about to be released, odds are she’ll be in it (with a 25% chance she’ll be the lead). She’s been cast in her required Tyler Perry film (The Family That Preys). She’s held so many memorable roles is films that are firmly a part of Black lexicon: The Wood, Brown Sugar, The Best Man. And who could forget her turn as the mother of a vampire killer in Blade?

Maybe that Cleveland Show money got too good. Maybe the sudden resurgence of The Best Man franchise has her thinking she’s infallible. Maybe being pursued by both Morris Chestnut and Michael Ealy in the same movie made her think she had magical powers. I don’t know how these things work; Hollywood operates under its own unique set of rules. But whatever the cause, she thought she could release a single, featuring Dej Loaf, in her 40’s talking about “emotional n*ggas” and everything would be ok.

Ms. Lathan … things are not ok. 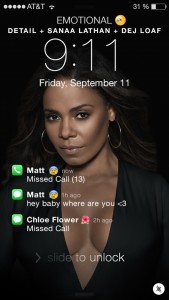 The story goes that Lathan had a chat with producer Detail about Michael Ealy’s obsessive character after screening of her newest  film The Perfect Guy. Somehow that talk snowballed into her entering a studio and recording a song, “Emotional”, that sounds cheap, heavily auto-tuned, and has the lyrical maturity of a nine-year-old.

My favorite line from the lyrical opus?

“Be strong you can take control
Pull my hair and bend me over
Be a fighter, be a soldier
Keep that $h!t it’s brown sugar”

If this song is any reflection on the content of the movie, I’ll be skipping the theater, on-demand, and Netflix streams.

As if matters couldn’t get any worse, it recently became public that Lathan and rapper(?) French Montana are dating. Really? French Montana? Please tell me this is a promotional stunt for The Perfect Guy, and the other “rent-a-celebrities” that usually fill this role were already booked. He has dated a Kardashian. He got so high once that he bought two baby tigers (naming them Ike and Tina of course).

His name is FRENCH MONTANA. By marriage name rules, that pairing is forbidden (Sanaa Montana doesn’t even sound like a real name). This is the epitome of “not a good look.”

These words may seem harsh, cutting, or mean. And that’s because they are meant to be. What is happening here is not cool, and we have to put a stop to it. I say all of these things not because I want to, but because I care (and also because I want to be able to hold on to my belief that Sanaa Lathan is really Monica from Love & Basketball, just grown up).

Sanaa, don’t do this. Be our unicorn. We believe in you.

Stream her debut single “Emotional” below if you dare.