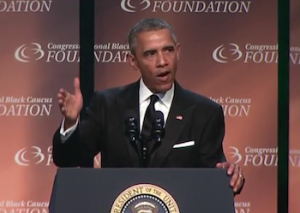 A few weeks ago, 2016 presidential hopeful Hillary Clinton stood in a predominantly Black church, before a grieving audience of activists, journalists, and the families and friends of the nine Black church members who were killed at the Emanuel AME Church. In that speech, Clinton said the words “All lives matter.” This phrase, while seemingly innocuous, has been used by many – especially via social media – to undermine the call to action that “Black Lives Matter.” Some still praised her speech saying it was good she even decided to discuss race. But, President Obama’s speech at the 2015 Congressional Black Caucus Foundation Gala on Saturday evening, committed to discussing this country’s history of racism and activism, stands out as a far better example of political accountability for dialogue on race and equality in this country.

President Obama has been lambasted for his equivocation on race in America. But, it seems his last term has signaled a sea change in his politics. This was made quite clear on Saturday night. One of the most poignant aspects of the speech was President Obama’s focus on Black women.

Around minute 4:00, President Obama began laying the foundation for a speech which is clearly meant to highlight the roles of women, specifically Black women, in the social movements of yesterday, today, and tomorrow.

“Women were the foot soldiers. Women strategized[sic] boycotts. Women organized marches,” Obama said. “Even if they weren’t allowed to run the civil rights organizations on paper, behind the scenes they were the thinkers and the doers making things happen each and every day, doing the work that no one else wanted to do.”

It was this acknowledgement of the central role of Black women in society, along with the recognition that women make “thirty fewer cents for every dollar” when compared to White men, that showed a stark deviation from most political rhetoric on race (although, Black women actually make more like 64 cents to every dollar a White male earns and Latinas earn closer to 56 cents). When juxtaposed against the speech given by Clinton, it appears confounding that a presidential hopeful would neglect to recognize the pivotal role Black women have played in securing freedom and equal rights. Or, that she would fail to acknowledge how America’s racist past and present animates economic inequalities across the races. Former Secretary of State Hillar Clinton truly has some work to do in advance of next year’s electoral season if she stands any chance with Black – specifically women – voters.

At present, Black women are still being arrested, murdered, and intimidated by police forces. In addition to the economic inequalities, Black women endure unequal treatment in public educational systems. And, Black trans* women remain unsafe and unequal in almost every public space in the United States. President Obama’s speech, while it can’t solve all of these issues, was a seized opportunity to foreground the marginalizing conditions faced by these women. And, it should be recognized as a unique moment of political accountability amongst numerous other wasted opportunities to combat racist oppression in the United States.

Watch President Obama’s full speech at the 2015 Meeting of the Congressional Black Caucus below: