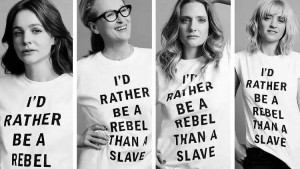 Most White women feminists in history have compared their state of gendered oppression to that of slaves. And, while this sad fact is both ahistorical and dismissive of the actual atrocities of slavery, the recent media from the Suffragette film – featuring Meryl Streep – is right in line with this ill-informed narrative.

The 2015 film is set to tell the story of 19th and 20th century British women who were integral in the women’s rights movement. But, the movie and the images of its cast members in a shirt that reads “I’d rather be a rebel than a slave” – a quote from Emmeline Pankhurst who Streep plays in the film – have come under fire for their lack of emphasis on people of color in the movement and insensitivity to how these movements have impacted non-White groups.

In a recent interview with Timeout London, Streep was apprehensive about using the term ‘feminist’ to describe herself. Instead, she said, “I am a humanist, I am for nice easy balance.” While I’m not sure what that even means, I am sure that Streep fits neatly into the feminist work of her foremothers who too were unwilling to unequivocally commit to the dismantling of systems of oppression.

Historically, their focus has been on the status of marriageable bourgeoisie White women whose biggest concern was not having enough say in the ongoings of the heterosexual household or any claim to the property rights of their namesakes. In essence, the early feminist movements, or better women’s rights movements, were based on the centeredness of married, class-privileged, White women who had no conception of (or concern for) the varying levels of oppression impacting women of color or those in lower economic classes.

Some White feminists today attempt to ignore this historical framing of women’s rights movements, but they do so not in an effort to dismantle racist and gendered systems of oppression. Rather, it comes from a place of embarrassment. It’s hard to admit that one simultaneously wields skin and class privilege while seeking to dismantle male privilege. For many White women, I’d imagine even for Meryl Streep and the likes of the ever problematic Lena Dunham, the cruel fact is that their feminist work is directly linked to their position in a racial and class hierarchy. Their access to certain avenues of activism, their influence in certain circles of influence, and even the levels of attention and scrutiny they receive upon engaging on these issues is anchored in an undeniable yet usually overlooked empowerment they get just because they happen to be White, woman, and well-off at the same time. These facts are undeniable.

The Suffragette film is described on IMDB as the story of “the foot soldiers of the early feminist movement, women who were forced underground to pursue a dangerous game of cat and mouse with an increasingly brutal State.” Yet, it makes no mention of the roles Black men like Frederick Douglass and W.E.B. Du Bois played in the early calls for women’s voting rights. It also completely disregards the work of Black women like Sojourner Truth and Ida B. Wells who simultaneously faced racist White women and sexist White men while fighting for their rights. Some of our favorite historical feminists like Susan b. Anthony, Elizabeth Cady Stanton, and Lucretia Mott struggled with their racist predilections. But, you won’t see that scrawled on a t-shirt any time soon.

Frankly, the feminist movement has never fit neatly into anti-racist activism, hence the multitude of issues Angela Y. Davis outlines in her book Women, Race, and Class with the Equal Rights Association. Davis explains that White women leaders of the women’s rights movement “in articulating their opposition with arguments invoking the privileges of white supremacy…revealed how defenseless they remained – even after years of involvement in progressive causes – to the pernicious ideological influence of racism.” These t-shirts, though seemingly trite, evoke the same historical narratives that birthed White feminist work. I hate to be cliché but, perhaps the more things change, the more they do indeed stay the same.

Some will continue to rail against Streep and her costars for donning the t-shirts in question. But, I’d rather focus on the root disease here rather than the symptoms which are so visibly dismissive and troubling. The fact is, mainstream White feminism continues to be part and parcel with a heteronormative, racially oppressive, cissexist, class privileged system of domination. Just because these women are great in movies or join social organizations to feed starving children doesn’t mean they are immune from oppressing others.

When these elite do-gooders start to see these movements as interlocking and mutually inclusive, we may start to get somewhere with ending oppression altogether. However, as long as we focus on the racially-insensitive t-shirts donned by four rich White women, we’ll miss the very real problems of mainstream White feminism hiding in plain sight.