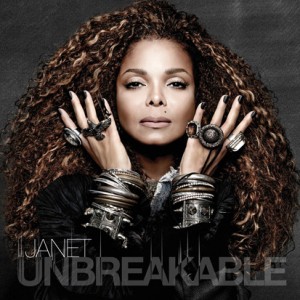 On Janet’s comeback album Unbreakable, it is all about delivering classic Janet in every way.

Let’s face it: Janet Jackson has never been a vocal powerhouse. She fits much better in the “entertainer” category than with vocalists like Whitney Houston, original Mariah Carey, Jill Scott or Jennifer Hudson. But, like Madonna, she has been successful in the music industry by delivering incredible performances and sounds that made a statement and defined a generation.

Broken into two parts, Side One and Two like a cassette tape, Unbreakable, her seventh #1 album, plays like a greatest hits album, but of songs you haven’t heard yet. At its best, the album shows just how vital a good producer is. The title track opener exposes the weaknesses of Jackson’s voice, not the most promising start for an artist that hasn’t released a new album in 10 years, but its throwback groove is wholly pleasing to the ear. The ode to her fans, though not her most memorable work, proves that, if nothing else, Janet Jackson knows how to put a song together with layers of beat, melody, and vocals.

“BURNITUP!” elicits heavy bass and the one and only Missy Elliott for a super hype dance track. This is where Jackson is at her strongest, with infectious beats that serve as the perfect vessel for her energy.

“Dammn Baby” is more of a slow burner, fashioned for riding in your car with all the windows down. This heavy synth sound is a new one for Ms. Jackson to try on, but it suits her well. Her flair will remind you of her Rhythm Nation and Velvet Rope days, two of her strongest and most memorable eras.

The slow groove of the album’s first single “No Sleeep” elicits the sensuality Jackson showed on her Janet. album. Perhaps the most modern of the songs shown here, it fits in nicely with the rest of the tracks. Still, the afterthought addition of rapper J Cole proves to be the highlight as his verse is so strong that the song would probably be more compelling if it were his with Janet being the feature.

Another hallmark of Janet Jackson’s career has been sparse ballads like “Any Time, Any Place” or “Let’s Wait Awhile”, and the next song, “After You Fall,” fits squarely in that lane. Set to just a barely there piano, Jackson’s delicate voice sounds fitting. She’s able to valiantly reach for some emotional depth here, and she reminds us that at her heart, she is a true artist.

That artistry is most on display in the second half of the album with songs like songs like “Lessons Learned” and “Black Eagle” that are laid-back like “That’s The Way Love Goes”, but with introspective lyrical content. “2 B Loved” feels like an updated version of “All For You”, with that same pop sentiment. Bombastic bass propels the mid-tempo track forward, and most importantly, the complete product just feels good.

In total, the songs blend together for a seamless experience. This tactic of making a fluid track progression was popular in the 90’s, with Brandy’s Never Say Never being a stellar example, because it made listening to an album an entire experience. But that was only successful if the greatness of each track built to something greater or if the collection of songs makes a significant impact. Janet Jackson doesn’t quite hit that mark here. But, what she does achieve is a pleasing offering that comes together as a reward for longtime fans.

As she has been known to do, the album is bloated with tracks (17), and it listens long. But, if nothing else, Janet Jackson served up a reminder of what made her so great in the past and proved that she isn’t giving up that crown.