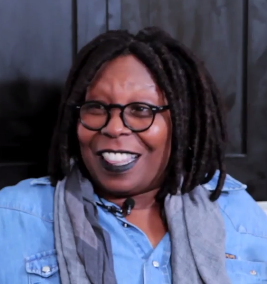 In the very same week that Raven-Symoné said that she would discriminate against people with “ghetto” names, Whoopi Goldberg, in an interview with BET, suggested that Viola Davis’ Emmy speech – chastising Hollywood for its inaccessibility to women of color – was wrong because “there’s been plenty of opportunity” for these women. But, the real question is: why is anyone asking Whoopi about Viola’s speech anyway?

Let me start by saying this: no shade to Whoopi Goldberg. Her career in Hollywood and comedy is not to be dismissed nor diminished.

We all fell in love with her as “Celie” in The Color Purple (1985). She was the iconic spirit-channeler “Oda Mae Brown” in Ghost (1990). No one will ever forget her work in the Sister Act franchise or on our favorite shows like A Different World, Captain Planet, and Star Trek. But, to be honest, Goldberg’s roles have dropped off significantly since the 1990s. And, even if she was in box office hits and highly rated television shows back then, she was rarely the lead character. Her career has been perpetually defined by being the funny sidekick, the voice of the animated character, the voodoo woman, the take-no-shit auntie, or some derivative of an exaggerated character whose presence on-screen isn’t meant to captivate but to complement the core story.

Given this history, one would think that Viola Davis’ account of Hollywood’s limitations on women of color, Black women in particular, would resonate with Goldberg. When Davis said, “The only thing that separates women of color from anybody else is opportunity. You can’t win an Emmy for roles that are simply not there, ” one would expect that Whoopi Goldberg could relate at least on some level. However, Goldberg is now committed, like Raven-Symoné, to controversy, devil’s advocate-ism, and counterfactual rhetoric. Rather than noting the undeniable historical truth to Davis’ comments, she worked her way around a flimsy argument about Emmy recognition and entirely missed the mark.

Specifically this is what Goldberg said in response to Viola Davis’ speech during her interview:

“Well, I’m not sure what it means. Opportunity to do what?” she asked. “Do you know what I mean? The truth of the matter is there’s been plenty of opportunity. I mean, Scandal. Let’s just start with that. Kerry Washington is there and she’s working her booty off, okay? But they didn’t vote for her. So, maybe the question is, what do you have to do to get voted on? That’s the thing.”

This argument holds no water. Scandal – while a brilliant example of modern television – has only been on air for three years. Three years. Viola Davis has been in the Hollywood game for over twenty years. Anyone who actually cared about Davis’ concerns might see that she isn’t only talking about the last three years of television.

Goldberg had more to say.

“…you don’t get the pat on the back that says ‘Yes, it’s okay to hire these women.’ See now there will be more parts, more dramas because Viola got an Emmy award.  Everybody wants an Emmy. So, they’ll hire more Black women.”

In essence, Goldberg is saying that the issue in Hollywood is that the few Black women who are there do not get recognized for their work. In addition, she is arguing that there is little incentive for studios and production companies to hire Black women because the awards, often, just aren’t winnable. But, isn’t that the exact same point Viola Davis is making?

When Davis spelled out many of the Black women leading top shows right now (Kerry Washington, Taraji P. Henson, Halle Berry Nicole Beharie, Meagan Good, and Gabrielle Union), she was pointing to a measurable sea change in representation of Black women on the small screen. TV is getting more diverse. Thanks to people like Shonda Rhimes, it is happening much faster than many people ever thought it would. This doesn’t mean that there have always been opportunities. But, it certainly means that there are a few now.

At this year’s Emmy’s, Viola Davis made history as the first Black winner ever for Best Actress in a Drama. This was the same night Uzo Abuba became the first Black actress (or actor) to win for the same role in two different categories. If this conversation isn’t about opportunity, I don’t know what else it could possibly be about.

Whoopi Goldberg’s failed attempt at being contrary backed her into the very argument Viola Davis was making. Her failure to notice it is simply because she wants so badly to move the conversation away from race. This is the blind opportunism of elite blackness. This is the same elixir which animates Pharrell William’s “new Black” claims, Common’s “hand in love” to racist White people, Keke Palmer’s requirement that folks “Stop separating yourselves through race” after Michael Brown’s murder, and Kanye West‘s, well, everything.

The next time BET wants rational thoughts on Viola Davis’ speech, I suggest they talk to Cecily Tyson, Lynn Whitfield, Angela Bassett, or hell, maybe Viola Davis herself. Frankly, any other Black woman over 50 in Hollywood could give a better response than Whoopi Goldberg.