Watch the ‘Star Wars: The Force Awakens’ Trailer Folks Are Mad About 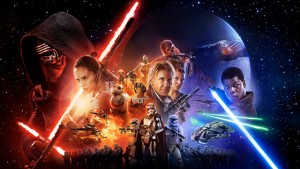 A full trailer for the next Star Wars film dropped this week, boosting ratings for Monday Night Football when it premiered at halftime. And when the tickets pre-sale opened, rabid fans crashed the Fandango and AMC websites from the influx of traffic. This might seem like unwarranted hysteria, but judging by the trailer, it all makes sense.

Opening in theaters on December 18, 2015, Star Wars: The Force Awakens is set 30 years after the events of Return of the Jedi. The trailer opens rather ominously with the question “Who are you?”, and the answer from new addition Rey (played by Daisy Ridley) is “I’m no one.” These simple words convey so much of what Star Wars is about, those that seemingly have little or no worth possessing the power to transform a galaxy. That was what Luke Skywalker did in the original trilogy, and old favorites Luke, Han, Leia, and Chewbacca are back to seemingly pass the torch to a set of new heroes.

The trailer is carried by that triumphant Star Wars theme, somehow given even more depth in this orchestral score. We hear the voices of nearly every prominent character in the film, but most curious is what we don’t see or hear. Aside from a “blink and you missed” it reach out to R2-D2 there is no Luke Skywalker. After the events of Return of the Jedi, you’d think the evil Empire would be out of power, but that doesn’t seem to be the case either. Instead, we have Princess Leia in tears, scores of Imperial fleets and troops, and enough high speed dogfights to know that, even 30 years later, the war rages on.

The biggest bomb of all is dropped by none other than Han Solo himself.

So the Jedi and the Force have been forgotten, reduced to fairytales? How does that happen? That tidbit alone is a sign that this film looks to be a storytelling masterpiece.

Feedback from the trailer has been swift and mostly positive. However, a sizeable enough contingent of racist White folks have already started a #BoycottStarWarsVII hash tag in protest of Black Jedi Finn, played by Attack The Block star John Boyega. The stupidity of this isn’t lost on me, especially since there is really only a small minority presence in this film and Black actors aren’t anything new to Star Wars movies, but I did get a bit of satisfaction from the closing shot of him wielding a lightsaber and preparing for battle. It’s like the studio wanted to send these ignorant bigots a clear message. I hope it was received.

In all, this Star Wars nerd can’t wait to behold the glory of this new enterprise. As far as I’m concerned, it’s long overdue.

Stream the trailer below!