The False Virtue of a Vagina ‘Certificate of Purity’ 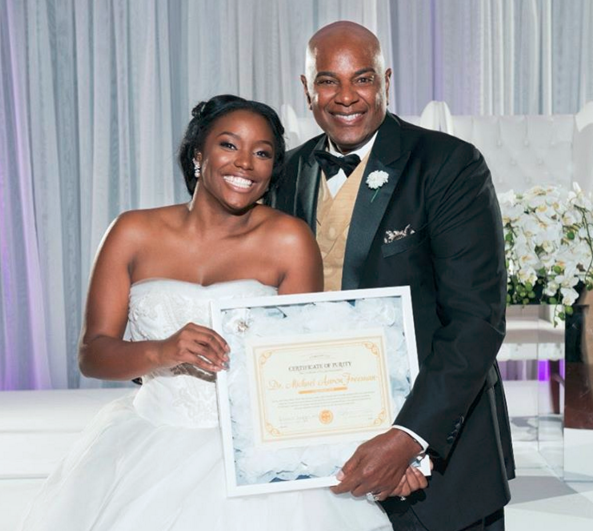 First, yes. The title of this article has the word “vagina” in it. I’m going to say it a lot because that’s what this post is about. I’m also going to talk about sex and penises and more sex and stuff. Calm down. You’ll be alright. Now, onto the topic at hand.

This month, a young Maryland bride named Brelyn Bowman presented her father – a pastor named Dr. Mike Freeman – with a certificate from her gynecologist confirming that her hymen was “intact” on her wedding day. The images of this presentation have since gone viral. While many have lauded this young woman’s fortitude, I find that this whole story is riddled with patriarchal and misogynist undertones that many Black Christians really don’t want to acknowledge.

The certificate read the following:

“On the 10th of May 2006, I, Brelyn Freeman, made a vow to glorify God in my body and spirit which are God’s because I have been bought with a price (Jesus). I have kept this commitment and present this certificate to my father Dr. Michael A. Freeman to show how I have honored God and my earthly father in my body by maintaining my purity and that my hymen is intact on this 10th day of October 2015.”

In essence, Ms. Brelyn committed to not having sex and promised her dad that her vagina would remain untouched until a man married her. While the roots in the scripture are valid, the pomp and circumstance this family went through to declare her vagina’s purity are both perplexing and kind of gross.

To start, having hymen tissue intact isn’t even a guarantee that one hasn’t had sexual intercourse or any other type of sexual contact. At 19-years-old, I still had hymen tissue attached after being sexually assaulted twice in high school. Likewise, a broken hymen doesn’t mean one has had sex. Horseback riding, contact sports, accidents, competitive biking, and a host of other things can tear the hymenal tissue. Therefore, this infatuation with a woman’s hymen isn’t even rooted in biological science.

One must also wonder how “purity” is defined if it only concerns the act of sexual intercourse. What about dry humping? Where does that fall on the spectrum of bodily impurity because we all know that dry humping is just a gateway drug, amirite? Did they have pacts about cigarettes, marijuana, alcohol, and other substances? How about fattening foods and high fructose corn syrup? Did he confirm that she never had a yeast infection? Those things are really fucking gross. There is literally nothing pure about a yeast infection.

I’m being hyperbolic. But, the point is: if her father didn’t place the same emphasis on the totality of actions which could or could not change the biological and chemical structure of her body, then he wasn’t upholding any biblical purity commitments. He was using theology to control his daughter’s sex life rather than simply empowering her by educating her about healthy sexual options, and trusting her to decide for herself.

She could have honored him just the same by letting forty penises slap her in the throat, eighty tongues massage her vulva, and a gaggle of fingers enter her anus. She’d still pass the hymen test and therefore, honor! Thus, the notion that a father’s honor rests squarely in his daughter’s vagina is not only unscientific, it isn’t even reliable.

Lastly, and on a serous note, the transactional appearance of a “Certificate of Purity” for a woman’s vagina is the literal definition of objectification. It’s as if, on the wedding day, Dr. Freeman was bequeathing his daughter’s body to her husband rather than giving away an entire woman to be loved, cherished, and cared for just as he did while raising her. Granted, she drafted the certificate. But, it was her father’s teachings which socialized her to believe that her body was not her own to be given when she wanted. She clearly had to ask her father’s permission first.

I agree that women’s bodies, especially women of color, should be valued and placed in esteem. I understand the need to show one’s parents that one has met a goal and preserved one’s sexual health. What I don’t support is the undue need to police Black women’s sexuality, to parade around our vaginas as sites of male honor and dishonor, to simultaneously devalue and hypervalue the contents of Black women’s genitalia to the point that, at least one young Black woman felt the need to certify the quality of her hymen tissue in the same way that a pharmacist certifies a drug or a plumber certifies a toilet repair or a farmer certifies that his pork loins are organic.

I’m not criticizing the goal of waiting until marriage. I do find it is more often thrust upon young women than men but that’s the topic of another post. At one time, I think waiting was something I wanted to do. I’m not sure if it was societal pressure making me want to prove I could wait, that I could be a unicorn. Or, if it was a real desire of my own to lose my virginity on my wedding night. In either case, it didn’t turn out that way. And the stress of my sexual assaults were only compounded by a Black Christian narrative that I was no longer “pure,” no longer “quality,” and less desirable.

I sincerely wish this couple the best. And, I hope they find that Ms. Brelyn’s body never required her father’s approval, her vagina doesn’t have an expiration date, and her marriage rests on so much more than the artificial capital men invest in her sexual experience.