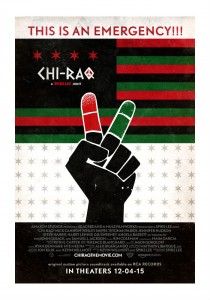 When plans for Spike Lee’s Chi-Raq were announced, the uproar was immediate. Some denounced the title alone. Some saw the film as a play to make money on the backs of those that have lost their lives. And while I still don’t see the necessity in using the name “Chi-Raq,” the first trailer for the film points at it being much more than expected.

The film, which serves as the launch of Amazon Studios and will be on limited release starting December 4th, focuses on gun violence in Chicago, adapting the plot of Aristophanes’ Lysistrata. And as “Spike Lee Joints” are known to do, it looks like he will be taking a no-holds-barred approach.

After the murder of a child by a stray bullet, a group of women led by Lysistrata organize against the on-going violence in Chicago’s Southside creating a movement that challenges the nature of race, sex and violence in America and around the world.

The features in the trailer are beautifully shot, and the 2 1/2 minutes are crammed full of emotional moments. Samuel L. Jackson plays Dolmedes, the narrator of the film, to great effect as usual. The title character is played by Dear White People standout Teyonah Parris, and she shines on-screen.

Also featured are a who’s who of black actors including Angela Bassett, Harry Lennix, Steve Harris, Wesley Snipes, Jennifer Hudson, D.B. Sweeney, Nick Cannon and Dave Chappelle. Even John Cusack is there. If there was any trepidation that this film would be bad for Black America, these high-profile names suggest something different.

The involvement of Jennifer Hudson, a Chicago native herself who lost her mother, brother, and nephew to gun-related homicide, is the strongest ringing endorsement the film could get. But, some have voiced concern over the fact that the film reduces Black women to sexual objects for men. How Spike Lee plans to address these concerns is yet to be seen. One thing is certain though, we are all watching to see what will come of the Chi-Raq.

Watch the trailer below and give us your thoughts in the comments below.