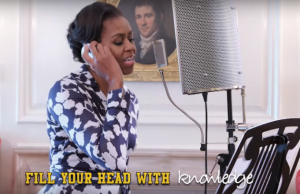 You ain’t neva seen a first lady like this.

On Thursday, the one and only First Lady Michelle Obama dropped a music video in which she raps about children seeking a college education, proving once again that the Obamas are the coolest family to take residence at the White House since ever.

I have never been a fan of Jay Pharaoh. His placeholder status on SNL  as a black man that can fill black man roles and make funny sounds has never delivered for me. However, even he can’t ruin a music video that showcases Michelle Obama “in the booth”, rocking sunglasses on the White House lawn, and dancing inside the White House itself.

I’m sure there are conservatives stewing over this, angry that the First Lady would use White House property as the location to shoot a rap video, but they were clearly not her concern when she put this project together with CollegeHumor.com.

In fact, she even delivers her own verse:

South Side Chicago, we all know, we had to do overtime every night to make it tomorrow.

And everyone could really make their dream true. Hey, kid listenin’ in Michigan, that could be you!”

Now, I don’t understand why Obama and Pharaoh are spitting these rhymes to two white kids (would’ve been nice to see some diversity there too), but there is no arguing with the message. Promoting college education is integral to individual long-term career success as well as the health and prosperity of our nation. Our First Lady clearly understands that, and she has made it a priority through a public awareness campaign.

The Better Make Room public awareness campaign, as part of her Reach Higher initiative, is working to inspire Generation Z (young people ages 14-19) to excel in high school and college. The campaign hopes to celebrate student stories in the same way celebrities and athletes are celebrated.

Now get your life and watch the video below: