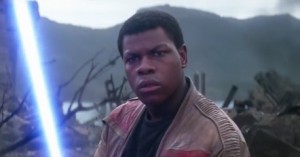 Star Wars: The Force Awakens is the movie everyone is talking about. It’s breaking records with each subsequent day it is in theaters. And after successfully avoiding spoilers before seeing the film for myself, I can say that the actual content of the film was overwhelmingly successful by staying true to the spirit of the franchise. But the Star Wars film franchise was born way back in 1977, and that classic sentiment could use an upgrade.

In the fantasy world of Star Wars, poverty still exists, but the “haves vs. the have-nots” trope is largely absent. Sexism remains an obstacle. But in almost every instance where it presents itself, that sexism is either beaten to a pulp or has the life choked out of it. And in a galactic war setting with a mixed bag of aliens apt to show up at any time, race doesn’t even seem like a reasonable discussion to have. Still, it is odd that the Star Wars films deliberately steer clear of any talk of race but have no qualms about forcefully dealing with other areas of marginalization, even empowering those within those marginalized groups.

Ignoring these subjects can have inadvertent effects on viewers. The inhabitants of a galaxy “far, far away” might understand that different skin color doesn’t make one’s humanity different from another, but that’s not how we see things playing out everyday in our world. Even as we see the new character “Finn” portrayed by “confident, Nigerian, Black, chocolate man” John Boyega and #1 Resistance pilot “Poe Dameron” being portrayed by Latino actor Oscar Isaac (Hernández), the roles they play don’t feel nearly as empowering for minorities as their castings do because there is no concept of race in the Star Wars universe to begin with.

This isn’t abject racism or discrimination. I’m not accusing the filmmakers of some half-baked “hyper-tokenism” theory either. But, it is symptomatic of the squeamishness Hollywood has around race. Too often, minority characters are stereotypes, stand-ins, or simply absent. And in Star Wars: The Force Awakens where there are two major minority characters, we barely even scratch the surface of their origins. They do the work of casting diverse actors and actresses only to gloss over the significance of these roles in the actual film itself.

I won’t even touch the fact that the iconic Lupita Nyong’o was cast as a small, red-skinned alien with bifocals rather than as the gorgeous Black woman that she is.

As viewers that don’t live in a colorblind world, it is silly to think that we won’t see race in the characters that appear on screen. We know how genetics work, and we know that Finn probably doesn’t come from two ivory skinned parents. And to continually ignore this fact is to treat us as if we’re flat out stupid. Maybe this is all a part of the plan, and as we get to know Finn and Poe better, we’ll also learn more of where they came from. But judging by over 30 years of canon, we have no reason to expect anything.

And that is what is saddest of all. Sci-fi properties have a history of progressive views. Looking into the future or into different realities, sci-fi is able to explore what things could look like if our ways changed. And comparing two of the most beloved sci-fi universes, Star Wars and Star Trek,  this is one area where Star Trek is the clear winner.

Where Star Wars is about action and broad swaths or universal emotion, Star Trek is about exploration, understanding, and progress, and through this lens, difficult or uncomfortable issues can always be discussed as a means for achieving enlightenment. Unfortunately for Star Wars, it’s idyllic, colorblind notion of race being a non-factor is a glaring failure.

None of this takes away from the film’s entertainment factor. I still plan on buying the ridiculously large box set of all Star Wars films once this new trilogy is complete. I’m sure I’ll watch this again On Demand once I can stream it at home. But I still hope that the next two films in the trilogy move away from racial erasure and become true champions for real diversity, rectifying decades of silence on race in mainstream entertainment and news media.