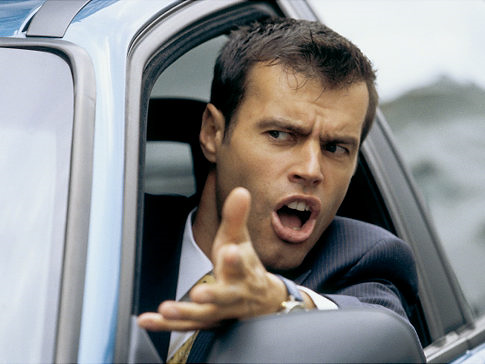 On Tuesday, I was waiting to park on campus after having driven in circles around the block four times. The one way street was backed up as construction vehicles and buses squeezed through. I saw a red pick-up truck begin to pull out of the spot I had been patiently waiting for when, all of a sudden, a small SUV swerved in front of me and began reversing toward my car. I slammed on the brakes with only half of my car in the spot, unable to move forward.

Confused by what was happening, I looked over at my mother-in-law who was visiting for the holidays. She looked just as puzzled as me.

Then, I saw the driver of the other vehicle point two fingers out of his window, signalling my attention behind us. Unsure of what he was trying to say, I interpreted him as asking to leave his car there for two minutes. In either case, I was in a rush to my first class of the winter term and had no time for this disruption of my already frantic morning.

I got out of my car to ask him what he was doing. Looking incredibly frustrated, he yelled, “I don’t know why you couldn’t just go park in the spot behind you. There were two spots.” Looking back, I realized he wanted me to attempt to put my minivan in a spot barely large enough for a compact car. I watched as a small sedan struggled to squeeze into the spot. Regardless, it struck me that this White man’s logical answer to not having a spot was to simply reverse into my car and attempt to strong-arm me out of one.

Irritated, cold, and rushed, I turned back to him and said, “Well, I was waiting on this park, sir. Can you please move your car?” I wasn’t going to give in to his flexing of power nor was I going to be intimidated by him.

He snarled his face becoming very irritated and said, “There were two spots!” He didn’t care that I was in a minivan which clearly wouldn’t have fit in that other spot. He didn’t care that half of my car was already in this spot. He was just angry that I wasn’t behaving in the way which best met his goals that morning. No doubt my blackness enraged him further, and my “Not Your Respectable Negro” shirt might have also broadcasted what I’m about.

Trying to remain calm, I replied, “Sir, I was waiting patiently here. I have a class to attend.”

He interrupted me with, “I do too! Now, because of you, neither of us is going to get a spot.” In my mind, I had to wonder what he meant by that. Clearly I would be getting a spot.

I realized that he was probably irrational and frustrated about something that had nothing to do with me. I decided not to engage with him further. As I walked away, I heard him call me a “fucking dumb ass” vowing not to move his car. Rather than respond to him, I sat in my car, opened my tupperware bowl of Trader Joe’s bomb ass apple cinnamon oatmeal, and proceeded to enjoy my breakfast. I was not going to be moved.

We sat there completely still for about three minutes, playing the most infantile game of parking spot chicken I never wanted to play. Then, he sped away.

I told my mother-in-law that I should have videotaped the confrontation or at least taken a picture of his license plate. For the rest of the day, I found myself peering out of the window at my car, worried he might key it or slash my tires.

After the altercation, I felt myself shaking. First, I was nervous because I had no idea what this man was capable of or if this could have been the time when he decided he felt threatened enough to shoot me dead in the street. Second, I was frustrated that I had been placed in a very public shouting match in front of my department building all because this guy was an asshole. And, finally, I just didn’t feel as though I had done anything to warrant his behavior in the first place.

Granted, this wasn’t the first time I have had White men (or women) lash out at me just for existing on my own terms. It happens far too often and seems to be excused in society as “boys being boys.” But, at some point, we have to acknowledge that the conflation of maleness with violence, recklessness, and disrespect all too often ends tragically (re: the “Affluenza” kid). Typically, these issues result in long term problems for everyone involved except the fragile White person.

Funnily enough, as I was driving later that day reenacting the story for two of my sister friends, a White male in the crosswalk began looking at me, throwing his arms up in the air and pointing. I saw him mouthing words that I couldn’t make out. Confused, I just sat there looking at him. We all did. He seemed angry with me even though my car wasn’t moving.

I soon realized that me speaking inside of my vehicle and moving my hands around to tell the story of my day led this man to believe I was somehow concerned with him. He just knew that his presence in the street walking lawfully was upsetting me enough that he needed to defend his right to do so. Once again, White male fragility was given center-stage as if my existence was pinned into a secondary position.

It was in that moment that it struck me (again) how fragile whiteness must be. In both of these cases, my mere existence conjured up the physical manifestations of anger and hatred within seconds. And while the second issue was much less threatening than the first, it was along the same spectrum.

The fact is: many White people of all genders deem themselves the center, the nucleus of society. This can’t be said for all White people, but there is certainly enough evidence to show that a substantial subset of the White population is committed to media, products and services, and even governmental programs which are meant to better the station and status of White people alone. Any deviation from this framework sends them into a tailspin. The rag tag bunch of terrorist militia men in Oregon are an example of this. They are literally threatening to kill people because they don’t feel privileged enough. If that isn’t White fragility, I don’t know what is.

As a Black woman, my mere presence in predominantly White spaces (like the college campus where both of these experiences occurred) means that I encounter these types of issues entirely too frequently. It wouldn’t be a far stretch for me to say that, at least once per day, a White male projects his issues onto me, undermines my legitimacy, disrespects me, or otherwise threatens my safety. Sadly, for many people of color, this is just another fact of daily life.

Some say the more things change, the more things stay the same. Perhaps that’s true in this case as well. Even in 2016, just a few days into the year, I am reminded what White male fragility has really come to learn nothing about itself. And, in the process, it continues to be a burdensome nuisance I am forced to navigate each day.