I Quit Writing At Least Once A Day… 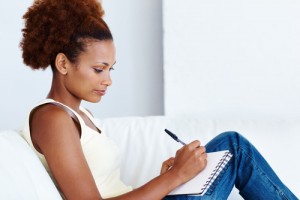 Nobody tells you how depressing it is to be a writer. And, even if they did, no one ever believes it. There’s a reason why writing is usually the second job or the dream that many can’t actually chase after until later in life. So, while I have embraced my life as a writer of fictional things, semi-fictional things, and sometimes convincing opinions on race, politics, gender, and life, I have also embraced the fact that I have been some level of depressed about all of it since I started in 2012.

Growing up, I always wanted to write. I had journals and journals where I’d scribble poetry and vignettes of stories I had dreamed about. I told myself it would be so cool if I could actually be a writer one day, but I never really believed I could. Back then, to me at least, writing was something you did if you already had free time. It was for people with money who were probably male and White. But, I would have to do something more “traditional.”

And, I tried. And failed.

I worked in corporate America for seven years, and while I found myself climbing the professional ladder, I felt like less and less of myself. I felt hemmed in, constrained. I hated every minute of it. It wasn’t until we started this website that I realized writing was the thing I had been missing all along.

I moved out of corporate America and into academia (and I realize that sounds like I am a privileged little snowflake but it wasn’t nearly as simple as it sounds). Being a first generation college grad and having meager social capital or assets to my name meant that this move would be risky. It was. It almost left us in financial ruin. Yet, we trudged ahead anyway.

It was the realization that we were made for this, that our Creator literally fashioned us for this work, that encouraged us to continue forward. Sometimes, that was all we had.

We are writers. There’s no two ways about it. I wouldn’t call either of us journalists, but we are certainly writers. Nowadays, that’s a title I struggle with. It’s work I find myself doing begrudgingly. It’s burdensome and lonely.

The truth is, this shit is rough. It’s cycles and cycles of shouting into the ether with only echoes of yourself in reply. It’s waiting at the doctor’s office for your name to be called. It’s the line at the DMV.

Tonight, after scarfing down Chipotle (yes, we still eat it so whatever) between emails, text messages, deadlines, assignments, edits, Republican debates, etcetera, etcetera, I found myself emotional enough to cry but unable to make a tear. Writing often does this to me. It’s a ball in my throat but it never gives me the gratification of manifesting as tears. It’s like it’s haunting me, reminding me that I’m its bitch.

For me, writing is like standing on the street corner in Santa Monica waiting for passersby to stop and listen. Some days, no one stops at all. Other days just a few. But then, there are those days when hundreds of people come by, they toss money in my hat, they hand me business cards and tell me they’ve never heard anything like me. But, just a day later, the crowd fades. It’s just me. And ether.

This is not to say that we don’t have our loyal readers. We absolutely do and we hold obscene amounts of gratitude for their honesty, patience, and grace as we continue to figure this whole thing out.

That’s the whole point. I’m not sure it can ever be figured out. Writing is never knowing, just hoping. Some days are more hopeful than others.