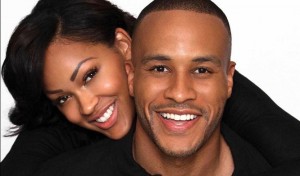 Folks have been concerned about Meagan Good’s clothing choices for what feels like forever. A few years ago, she was in the news for wearing a revealing dress (that she looked absolutely stunning in) as a Christian woman and a reverend’s wife. The concern was that her attire didn’t match up with her faith. Now, video footage has emerged of yet another person who identifies as Christian maligning Good and telling her to “cover up.”

In the video, Good and her husband DeVon Franklin were promoting their new book “The Wait” which tells the story of the couple’s celibacy before marriage. Rather than take the opportunity to congratulate the couple on their immense success, their apparent happiness, or ask questions about their journey, one member of the audience came for Good stating that she was walking past a news stand and saw Good’s breasts. She then ended with “you gonna cover up right?”

Franklin was not having any of it responding, “No, she is going to wear whatever she wants to wear, in Jesus’ name.” Good had an even more gracious response asking the woman to pray for her after being brought to tears by the support of her husband and the audience.

What bothered me most about the comments was how the young woman couched everything she had to say in Christian faith and having “the Holy Ghost.” There was nothing Christian about confronting Good the way she did, nor was their anything loving about the way she did it. Her opinion was her own but she positioned herself in judgement of Good.

In the end, the way it was handled by both Franklin and Good was positive and very Christian. But, hopefully, people stop using Christian faith to limit women’s self-expression. It’s old. It’s tired. And it isn’t even biblical.

Watch the video below: