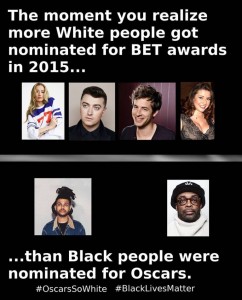 Like the Oscars, the BET Awards winners are not voted on by the general public. Instead, nominations and winners are decided on by the BET Awards’ own nominating body comprised of about 500 people within the entertainment industry from music moguls to print media folks to bloggers. The main difference here, as it seems, is that the BET Awards’ voting body has no qualms with awarding the worthy, regardless of skin color.

So, in an effort to shut down the false arguments once and for all, I have compiled a database that notes every single white person who has ever been nominated for a BET Award, also noting how many have actually won.

In the award show’s short 14 year tenure, white people have actually won 7 times across roughly 12 categories. Let me clarify: an award show established to celebrate African Americans and other minorities in music, acting, sports, and other fields of entertainment, has nominated white people 47 times and actually awarded them 7 times in 14 years. Compare that to the 143 nominations and 32 wins black folk have received over the 87 years of the Academy awards, taking into account the list of awarding categories sits around 24.

Just performing some rough math (and assuming about five nominees in each category for both awards shows), this means white people have a 5% chance of being nominated for a BET Award and 1% chance of winning. Meanwhile, black people have a 1% chance of being nominated for an Academy Award and a .3% chance of winning. These calculations are generous since the Oscars can have up to ten nominations for some categories and they often give awards for non-film related categories like Humanitarian of the Year and other honorary awards.

This ends the conversation about white people not getting BET Awards. And, it only strengthens the concerns about the Oscars being so incredibly, conspicuously white. So, the next time you hear some uninformed, white supremacist language exclaiming that white people don’t get our stuff too, remind them that they actually do. This is a fundamental part of the problem. White people get all the awards. They even have a chance at ours.

Those summary statistics do enough work in showing the disparity between the awarding bodies, but for more insight, refer to the full list of nominees and winners below: