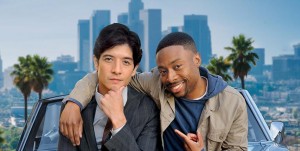 The Rush Hour films were made classics by the chemistry between leads Chris Tucker and Jackie Chan. Too bad the same can’t be said for the TV adaptation.

I tried to watch it. I tried to give it a fair viewing before I went in. But within 5 minutes, when Detective Carter fell off of a helicopter and into someone’s pool with the punchline “it’s raining black people”, I knew what I was in for: coonery and buffoonery at their best. And the hits kept coming as the show attempted to work in many of the jokes from the original movie, just less inspired and delivered poorly. So in case you might be thinking about trying out the series, just know that these 5 things are funnier that this show, and then make your decision accordingly.

Take your pick. The original, 2, or 3. At their worst, they were all better than this struggle series. Whether the writing was good, bad, or otherwise, the movies could always rely on the chemistry between Chris Tucker and Jackie Chan. You can’t just substitute any black comedian and Asian martial artist and get the same magic.

Yes, it could be disastrous for anyone outside of America’s top .01%. Yes it could be a literal sign of the end times. But with Donald J. Trump as our own legitimate president, comedians would have it better than the George W. Bush years, and his efforts to function within the realm of the shambles we call the American political system would be like watching an 8 year old take a Calculus class.

Because there is nothing funnier than seeing someone that was once so ensured of their own superiority fully realize how foolhardy they’ve been.

This 5 track mixtape was epic. How were able to write 5 complete songs about Hamburger Helper? They had lyrics like this:

“Hamburger in the pot.
Always dressed for the plots.
Shoes tied in a knot.
Red light gotta stop.”

And that writing is still better than the writing on Rush Hour.

Everybody knows CBS is for old people. They love to claim that they are “America’s Most Watched Network”, but the truth behind that is that old people watch a lot more TV that younger folks. Their bread and butter are the CSI‘s, the NCIS‘s, and any other copycat crime procedurals they can churn out. But every once in a while, they like to take a chance on a “younger” show like Rush Hour, based on a popular film series that debuted in 1998 and starred two actors that many people under 30 might struggle to see as important or even remember. Because that is what appeals to today’s youth. Reboots from their elementary school days.