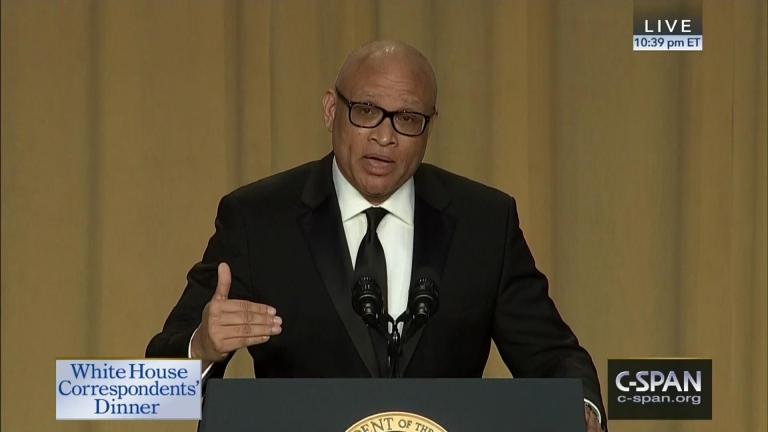 White people don’t like the N-word because they can’t say it without getting their asses whooped. So, here we are talking about it and such.

This past Saturday was President Obama’s final White House Correspondents’ Dinner as sitting president. He roasted pretty much everyone in the room and even went in on himself a few times (never saying a negative word about Michelle the Gawdess though). Everyone in the audience seemed to enjoy his set as White folks all over the room could be seen giggling to themselves or guffawing with glee.

After his speech, comedian and host of Comedy Central’s The Nightly Show, Larry Wilmore, delivered a much less well-received set that he ended with the words “Yo, Barry. You did it, my nigga.” Immediately White America began clutching their collective pearls, upset that Wilmore had used “that word” to address the President.

Once again, White folks (and some Black-ish folks) were struggling with the understanding that there are some things Black people can do that they simply cannot and should not do. And, just because they can’t do it – in this case meaning they can’t say “nigga” – doesn’t mean that Black folks should be denied the right to say it whenever, however, and to whomever they want.

During his speech, President Obama made some great jokes. He joked about Reince Preibus’s terrible leadership of the Republican National Committee (RNC) and how we are stuck with Trump as the inevitable nominee.  He even took time to invite ousted House Speaker John Boehner to do a cute video about what it will be like once President Obama has left office. It was a respectable speech, one that ruffled few feathers and even ended with the words “Obama out” and a ceremonial mic drop. The crowd (of mostly upper class White people who are very well connected and very not Black) loved it.

In a scathing critique, Jonathan Capehart wrote over at The Washington Post that,

“[N]ever before has the n-word been used to address the president. At least, not in public and most definitely not to his face. That’s why Wilmore’s use of it was as shocking as it was disrespectful. And that’s why many African Americans in the room and watching on television were appalled by Wilmore’s excessive and inappropriate down-home familiarity with the leader of the free world in front of the world.”

He went on to explain that Wilmore wasn’t at a “barbershop nor his momma’s house” so he should not have used such language in front of White folks or, as many Black mamas call it, “mixed company.”

Wilmore has come out explaining that his use of the word “nigga” was and is meant to take the word back from its ugly history. He also defended his right to use it to describe President Obama, another Black man who he admires and calls a friend. The White House has expressed no issue with it either.

Now, I am not here to defend the word itself. Folks have varying opinions on that. And, frankly I don’t care one way or another what other Black people choose to say or not say (unless it is homophobic, ableist, misogynistic, fat shaming, or the like). (And, If you want a historically grounded analysis of the word “nigga,” Gregory Carr, PhD. has already done that at Ebony.com). For me, this is less about whether or not this is a nice word and more about whether or not Black people should be restricted regarding when and where they say it or anything else.

The fact is: White people call us “niggers,” “niggas,” and a host of other things when we aren’t around. If we choose not to say those words in public for fear of seeming disrespectful or racially-insensitive, we are just legitimizing White Guilt and placating expectations that Whites place on us about how we should behave in their presence.

It was a few years ago while reading a Facebook post from the prolific writer and dope Black man Kiese Laymon that I learned that not using the n-word has never protected us from anything. It hasn’t triggered any calls for reparations. It hasn’t reformed neoliberal policies. Not saying nigga never got our schools reopened or wages raised. So, what has it done for us except conflate our liberation with censorship and exchange public freedom for a different set of shinier more respectable looking chains?

The fact that Larry Wilmore called a sitting president nigga wasn’t disrespectful. It was Black. It was owning Blackness and recognizing that it is full enough even to include the current occupant of the Oval Office. Whatever White people (and Jonathan Capehart) have to say about that is their business. They can tend to their’s and us niggas can attend to our’s.