#YAwithSoul Is the Perfect Intersection of Blackness and Books 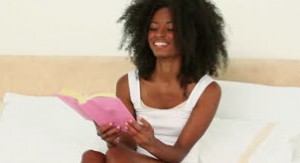 Black Twitter has done it again. The hashtag #YAwithSoul envisioned your favorite Young Adult books infused with a heavy dose of blackness. Suffice it to say, political satire and overall hilariousness ensued.

What happens when you take Young Adult books (notorious for its focus on white characters) and reimagine them with black folk instead? You get #YAwithSoul. It’s all of those YA bestsellers, just chopped and screwed.

And then Black Twitter was off to the races with alternate versions of popular books like the Harry Potter series, the Hunger Games series, the Divergent series, and much more. I’ve cherry-picked some of the most hilarious below:

Harry: I tracked down Wormtail!
Prof. McGonagall: Boy you betta stop running in and out of this tower letting all my heat out. #YAwithSoul

Hagrid: Follow the spiders.
Ron: Nigga, is you drunk? Fuck I look like?
Harry: Come on, Ron!
Ron: Bruh, did I stutter?#YAwithSoul

Finnick: You could have made off like a bandit in the Capitol…jewels, money

#YAwithsoul Children find game in cupboard. As they're about to open it & start mayhem, somebody left all these dishes in the sink.

#YawithSoul When the prophesy says you're the Chosen One: pic.twitter.com/af2cGfioy3

When they call your Primrose's name.

When Shea Moisture FINALLY makes it to Hogsmeade: #YAwithSoul pic.twitter.com/CpAtzUTksL

So you had me running all up and down the yellow brick road and all I had to do was click my heels? Oh ok. Somebody hold Toto… #YAwithSoul

#YAwithSoul Your first and last day in Dauntless. #Divergent pic.twitter.com/7xiBGZcZOt

In the end, #YAwithSoul speaks to the need for diversity in literature. We need stories that everyone can relate to, and if more YA books sounded like the tweets above, the world would most definitely be a better place.