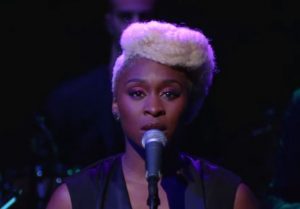 You’ve got to have some pretty impressive pipes to stand toe to toe with Jennifer Hudson on a stage. And with her performance of “I’m Here” from the Broadway revival of The Color Purple, Cynthia Erivo makes it look easy.

Erivo stopped by The Tonight Show with Stephen Colbert to promote the Tony-nominated Broadway production of The Color Purple, for which she is also nominated for a Tony. She has been a powerhouse on the stage, often receiving standing ovations in the middle of the production. And here, flanked by a small troupe of live instrumentation, Erivo stands flat footed and sings the hell out of the musical’s most notable composition, “I’m Here.”

All the more impressive, this performance was taped after the star ran a half marathon and performed a 2-show day. How she still had the ability to perform to this magnitude after that strenuous of a schedule is beyond me. However, it might have been one showstopping performance too many as she had to cut her performance in the musical the following day after Act 1, citing illness.

As a part of the diversity that is taking Broadway by storm and claiming a record number of Tony nominations, Erivo was also nominated for a Best Actress in a Musical Tony. And while I haven’t been able to make the trip out to New York to see the show myself, this chill-inducing performance alone more than proves her worthiness.

Check out the performance below: