Stephen A. Smith Has a Point About the Curry Family And Colorism

I’m not a fan of ESPN’s Stephen A. Smith. I’m not even remotely interested in organized sports. And, I have no investments in any of the intersections of the two. However, after listening to Smith’s colossal fuck up of a color commentary during the NBA Finals, I saw both why people were so angry and also some merit in what he had to say. Just read everything before you start throwing tomatoes my way.

For many reasons, I wanted to get some distance from Smith’s comments (and the NBA Finals) before writing this essay. I know the Finals are heated and some feelings were hurt when the dust settled on the final scoreboard with the Cavaliers winning and the Warriors heading back to my hometown with no trophy after a phenomenal season. Here is what went down and prompted a reaction from Smith.

On June 17, during game 6 of the NBA Finals, Steph Curry was ejected after he received six foul calls. Instead of leaving the game quietly, he took out his mouthpiece and threw it into the crowd in anger. Fortuitously, it hit Andrew Forbes, the son of minority owner of the Cavs Nate Forbes. This caused both Curry and Warriors coach Steve Kerr to incur fines of $25,000 each.

Following this tough loss, Ayesha Curry, Steph’s wife, took to Twitter to denounce these actions, citing the Finals being “rigged” (without evidence of course). After realizing she fucked up by making such an accusation, she deleted the tweet but the Internet never forgets. 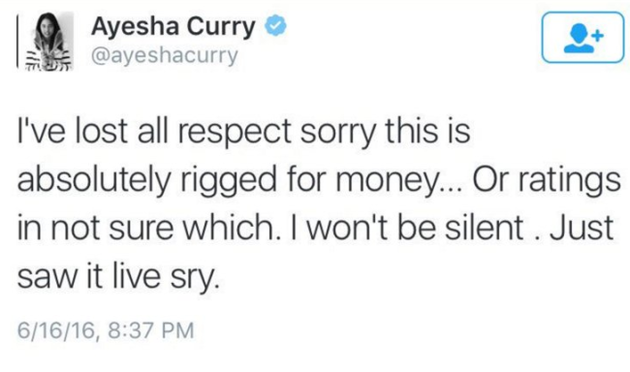 This is the tweet that set Stephen A. Smith off. On ESPN First Take, he had this to say about Ayesha Curry.

“As it pertains to Ayesha Curry, Steph Curry’s wife, beautiful young lady, promising future, but, she stepped out of line. She stepped out of pocket….You are the wife of Steph Curry, what you do is a reflection on him. What you do is a reflection on the organization he works for. You have to be mindful of that. You can’t get caught up in your own individual emotions in having this zest to speak out, to the point where it compromises your husband. That is not what you should be doing. And the fact that she did that, she was wrong. It came across as very classless, that’s a highly incendiary remark. To accuse the NBA Finals of being rigged because your husband got ejected from a game for the first time in his career.”

This is the part of his commentary that is entirely problematic and wrongheaded.

Smith started off the conversation situating Ayesha Curry as just a mechanism of her husband’s persona and career. He suggested a sort of “don’t speak until spoken to” politics that renders Ayesha Curry’s concerns trite and child-like. This is old-fashioned patriarchy. No frills, just a man being an ass hole and pretending that women aren’t humans. It’s disrespectful as hell but this is not surprising coming from the person who suggested that women play a role in the domestic abuse against them.

Smith went on a bit more about the scenarios where people have not used the word “rigged” to describe the wins and whirlwind career Steph Curry has had thus far. He, in another patronizing and patriarchal way, then called Ayesha Curry “adorable,” making it clear that some of his criticism wasn’t just stemming from his concerns  about her comments but also his judgement of her right to make the comments in the first place.

It was his next criticism that drew my attention.

“My other point that I would like to make, which will be deemed somewhat controversial but I don’t particularly give a damn, is that while I don’t have any problem whatsoever with the lovely and beautiful Mrs. Curry, Steph’s mom…blowing kisses at the crowd and stuff like that, it’s a little bit extra but that’s alright…what is controversial about what I am about to say, I will present in question form rhetorical or otherwise: if that were Savannah, Lebron’s wife, if that were Gloria, LeBron’s mother, what would we be saying?”

“As beautiful as everybody wants to say Ayesha Curry is, and she is, Savannah is something special. I’m here to tell you something right now. Ain’t a man alive, particularly a Black man, that’s not going to say that that woman ain’t gorgeous. Well, she’s wonderful inside and out. She sits there, she doesn’t bring any attention to herself. She never tweets and goes out there and calls out the league and stuff like that, and nobody, nobody is more scrutinized than her husband.”

Smith then goes on to say that Lebron James and his family can legitimately claim to be “the First Family of the NBA.” But, he says, Steph Curry and his family “are the ones that get treated like that.”

Ayesha Curry took to Twitter to respond to Smith. While her tweet made a valid point about Smith pitting two women against one another, his sins were much greater than that.

@stephenasmith why are you putting two women against each other like that? You're the one that's out of pocket.

Near the end of Smith’s sexist tantrum, he says this all gives him “cause to pause.” And, he could be right about this if we look through some of his blatant misogyny and clear hatred for any woman who has vocal chords and functioning brain synapses.

On one hand, Smith is praising Savannah Brinson for being respectable. He thinks she is a better woman in some respects because she “sits there” and doesn’t tweet. Conversely, his disgust for Ayesha Curry’s “classless” actions mainly stems from the fact that she “draws attention to herself” in ways that Brinson doesn’t. Again, all problematic.

On the other hand though, Smith’s condemnation of the recent “adulation” with the Curry family seems to be spot-on.

While Steph Curry is incredibly talented, and seems to be a great guy, the infatuation with him and his wife seems like an unearned privilege at times. Part of me wonders if the word Smith was looking for was colorism – the preference for people with lighter skin and, conversely, the hatred of people with darker skin tones usually within the same racial or ethnic group.

LeBron and Savannah are several shades darker than both of the Currys. And while Brinson may have chosen to play a quieter role in the NBA wives club, she and her husband have never been embraced by the mainstream in the same ways as Steph and Ayesha.

This isn’t just about Smith pitting two women against one another (he did do that and he did it because he doesn’t value women). This is also about having an honest conversation about the ways our subconscious and socialized preferences are articulated through our appreciation for certain athletes, singers and entertainers, movies stars, and everything else. Colorism is very real and has very real consequences for so many people.

Again, this is not a sign that I am joining Stephen A. Smith’s fan club. That couldn’t be further from the case. What I am saying though is that if we dismiss the entirety of Smith’s commentary as patriarchal drivel, we might miss out on a critical point about the ways that skin color operates even in predominantly Black industries like professional athletics.